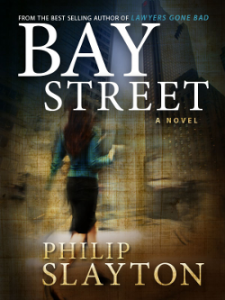 In the wake of a best-selling nonfiction book about lawyers behaving badly, a former law school dean and ex-partner at one of Canada’s elite law firms has turned to fiction.

In his self-published legal thriller Bay Street, Philip Slayton writes of money, sex, madness and murder, the Globe and Mail reports in a lengthy article about the author.

Filled with inside jokes (what the newspaper described as a “thinly disguised” version of top Toronto restaurant Canoe is called Flotsam in the novel), the new book includes an elite firm full of unhappy lawyers and a managing partner who regularly lures an attractive female colleague to martini-fueled lunches, amidst insider trading and a corporate takeover.

Slayton, who served as law dean at the University of Western Ontario and spent 17 years as a Blake Cassels & Graydon partner before walking away in 2000 at age 55, says the book is too realistic to be a caricature.

“I think in some respects it’s quite realistic and in others it’s not,” the now 70-year-old author tells the newspaper. “It’s not usual that people get murdered in Bay Street law firms. So I would say it’s an exaggeration, rather than a caricature.”