More Than 2,000 Exonerations for False Convictions in the US Since 1989, New Report Says 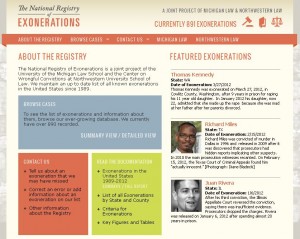 An unprecedented report asserted today that more than 2,000 falsely convicted people of serious crimes have been exonerated in the United States in the past 23 years.

In the most complete database of exonerations ever compiled, the new national registry closely examines 873 exonerations from 1989 through March 1, 2012 in close detail, of which nearly half were wrongly convicted of murder. Of those, 101 were sentenced to death, the Washington Post reports.

The first-ever published report (PDF) of the National Registry of Exonerations, assembled by the University of Michigan Law School and the Center on Wrongful Convictions at Northwestern University School of Law, highlights grave questions about the legitimacy of the legal justice system. In half of the 873 detailed exonerations, 43 percent of the cases involved mistaken eyewitness identification, and 24 percent of the cases involved false or misleading forensic evidence. Researchers also noted 1,170 individuals cleared in “group exonerations” related to 13 police-corruption scandals across the country, the Columbus Dispatch reports. It took an average of 11 years, from conviction to exoneration, for wrongfully convicted people to be cleared.

“This self-defeating dynamic is no less true in American law,” Cohen wrote in an Atlantic article. “In fact, you could argue that the gravitational pull of legal precedent discourages judges from fixing their mistakes more than any other rule of politics or governance.”

False convictions are also often the result of multiple culprits, according to the report.

“There’s usually someone to blame for the underlying tragedy, often more than one person, and the common culprits include defense lawyers as well as police officers, prosecutors and judges. In many cases, everybody involved has egg on their face,” wrote researchers, who were also concerned about the impact of false convictions on victims, families and friends. “Many of the victims who survived were traumatized all over again, years later, when they learned that the criminal who had attacked them had not been caught and punished after all, and that they themselves may have played a role in condemning an innocent person. In many cases, the real criminals went on to rape or kill other victims, while the innocent defendants remained in prison.”

Researchers estimate the total number of felony convictions in the United States is nearly a million a year, and for some of the exonerated individuals, the inclusion of their case in the database was pure luck, said Samuel R. Gross, a Michigan law professor and editor of the Registry.

“We know there are many more that we haven’t found,” Gross wrote in the report. “These cases merely point to a much larger number of tragedies that we do not know about.”