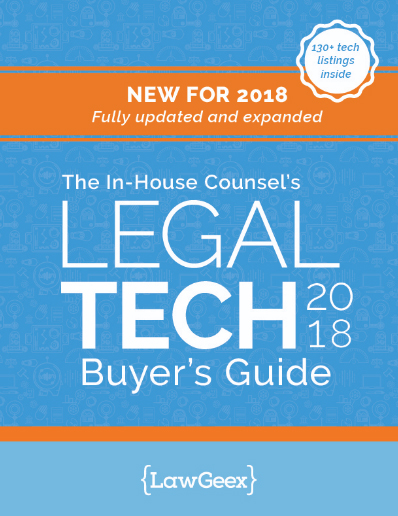 Artificial intelligence offerings in the legal tech field have increased by nearly two-thirds over the last year.

That’s according to a new report from LawGeex. The automated contract review company released its In-House Counsel’s LegalTech Buyer’s Guide 2018 on Monday. Among its findings was that the number of legal tech companies using artificial intelligence has increased from 40 last year to 66 this year. The report reviewed approximately 130 technology companies in 16 categories, including contract review, legal analytics and task management.

As indicated by the report’s title, it was built with in-house legal teams in mind rather than law firms.

“[The buyer’s guide] outlines advances in software that save law departments time and money, allowing us to focus on more strategic tasks,” Lucy Bassli, Chief Legal Strategist at LawGeex, wrote in the report’s foreword.

Not only focused on the provincial world of legal technology, the report includes enterprise players like Google, Salesforce and Sharepoint.

While there are numerous well-known companies listed, the guide leaves some questions as to how companies made the list.

“In each legal tech category featured in this guide, the top three to five players are given prominence,” reads the report’s methodology section. “They are not listed in any particular order and have all received recommendations from in-house counsel.”

It is not made clear how “prominence” was defined or what factors were used.

Shmuli Goldberg, VP of marketing at LawGeex, says that they aimed for objectivity and included those companies that “came up again and again” in interviews and showed product maturity.

This is not to say that there are not elements of subjectivity in the guide, Goldberg admits. He says that newer categories where information is less available and crowded categories both required editorial discretion. He adds that the company used third-party editors to improve the guide’s objectivity. It was unclear if the editors flagged issues pertaining to subjectivity.

“Our goal was to increase legal technology adoption,” Goldberg says. “The honest truth is that it doesn’t matter if you go with us or a competitor.”