Murder rate is way up in dozens of US cities, but why? 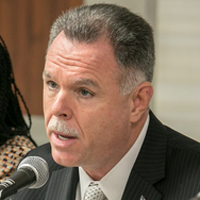 The murder rate is way up, so far this year, in dozens of U.S. cities, and federal and local law enforcement officials aren’t sure why or what to do about it.

Some blame the so-called Ferguson effect, a theory that the rioting and racial tension that followed the slaying of an unarmed black teenager by a white police officer in a small city outside of St. Louis has led to more lenient law enforcement and more crime. However, this hasn’t been proven, some say the data actually suggests that other factors may be contributing to a dramatic rise in homicides, the New York Times (reg. req.) reports.

Criminologist Richard Rosenfeld of the University of Missouri-St. Louis said St. Louis murders had already begun to increase before the slaying of Michael Brown in Ferguson.

Those figures helped spur an August summit meeting of officials from major cities throughout the U.S. and a Justice Department initiative on the subject will be discussed at a September conference.

Meanwhile, those dealing with the issue on a daily basis have their own ideas.

Minor disputes, often sparked by social media chatter, are leading to gunplay, said Capt. Mike Sack, who is a homicide commander in the St. Louis Metropolitan Police Department. Arguments over not only girlfriends but TV show characters and food can prove fatal, he said.

Chicago’s police superintendent, Garry McCarthy, also pointed to the availability of guns as one part of the problem and suggested harsher penalties for firearms offenders.

“Across the country, we’ve all found it’s not the individual who never committed a crime before suddenly killing somebody,” he told the newspaper. “It’s the repeat offenders. It’s the same people over and over again.”