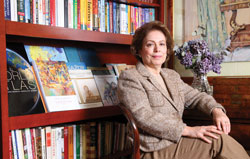 On a sweltering day in mid-July, Azizah al-Hibri, founder and chair of Karamah: Muslim Women Lawyers for Human Rights, presided over the graduation ceremony for the group’s 2012 Law and Leadership Summer Program. It was a festive occasion, held in the elegant drawing room of Karamah’s offices in Washington, D.C., housed in a building that once was the French ambassador’s residence.

After exchanging booming Islamic greetings with the 20 graduates, al-Hibri smiled. “I like your voices!” she said. “That’s assertive. The first day I could hardly hear you!”

As professor emeritus at the University of Richmond School of Law in Virginia, al-Hibri is used to encouraging her students to speak up. But for the participants in the Karamah program, there is a religious imperative, as well. “Islam says that women should speak emphatically so that they should not be seen as weak and vulnerable,” al-Hibri says.

In various Muslim countries Shariah, or Islamic law, has been cited to justify restrictions on women’s freedom of movement and ability to work, get an education, manage their finances, hold elective office and even—in the case of Saudi Arabia—drive a car. But a growing number of scholars, many of them women, argue that when it is properly understood, Islam not only allows but demands that women be full, active and even noisy participants in the world.

As change moves fitfully through the Muslim world, a more assertive role for women in that world may be an idea whose time has come. In 2012, the Gallup Center for Muslim Studies reported on a survey conducted in six Arab Spring nations: Bahrain, Egypt, Libya, Syria, Tunisia and Yemen. After the Arab Uprisings: Women on Rights, Religion and Rebuilding reports that majorities of both men and women in those countries support equal legal rights for both genders, support equal access to education, and think women should be able to hold any job they are qualified for.

But most of the respondents in five of those countries (Bahrain was not surveyed on this question)—both men and women—also agreed that any new government measures should be based at least partly on Islamic law.

Click here to read the rest of “Walking the Tightrope” from the February issue of the ABA Journal.