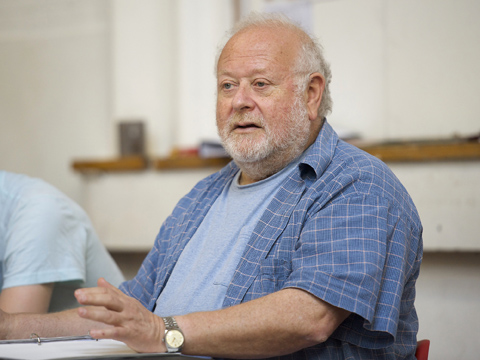 Editor’s note: Twenty years ago today, the film My Cousin Vinny—a film in the ABA Journal’s 25 Greatest Legal Movies—premiered in theaters. Abnormal Use, a blog authored by lawyers at South Carolina’s Gallivan, White & Boyd, is devoting a number of posts this week to this anniversary. Below is an excerpt from GWB associate Nick Farr’s interview with Vinny’s director, Jonathan Lynn, who has an M.A. in Law from Cambridge.

Nick Farr: In 2009, the ABA Journal ranked My Cousin Vinny third in its list of the top legal movies. Why do you think the film continues to resonate with viewers 20 years later?

Jonathan Lynn: That’s a good question. One never knows the answer. I think films that resonate over a very long period of time have some universal truth in them in the way the characters are portrayed. I think that the characters of Vinny and Lisa are—were unique. … You see so many films where the main characters are more or less interchangeable from one film to another, and these characters have not been seen on the screen before and probably not since. I think it’s partly great performances, and I think partly that the script tells an enthralling story. A crime movie is always good if it’s done properly and works well because there’s a lot of tension and a lot of drama involved. For me personally, what the film was about is how wrong capital punishment is and how people can so easily be executed when they’re not guilty if they’re not adequately represented or if there’s a lack of relevant evidence available. And we’ve just seen that this week with Troy Davis. I am profoundly opposed to capital punishment, and I think the film makes that statement. Although it makes it entertaining and in a way that isn’t preaching to people.

NF: Why do you think the film resonates with lawyers specifically?

JL: I think it’s a bunch of reasons. First of all, there aren’t any bad guys in the film. Most films seem to have a corrupt judge or a corrupt prosecutor or there’s somebody who’s a bad guy. There are no bad guys in Vinny. … We think that a film has to have, in film jargon, a protagonist and an antagonist—the antagonist being the bad guy. It’s a fact that it would be possible for someone to be convicted of a capital crime when they’re not guilty. But the judge is not corrupt. He’s very correct and a little straitlaced, but he’s not a bad guy. He’s fair. The prosecutor is more than fair. Nobody’s doing anything wrong. I think that’s the way it is in most trials, and I think lawyers are probably happy to see a movie in which the system actually works and in which all the participants behave correctly. So, I think that’s one aspect of it. In other words, I think it sort of validates the legal system. … Another reason would be that I think we got it right legally, and I think most trial films don’t. I was very particular about that being a recovering lawyer myself. I thought it was very important, and I … made a lot of changes [to the] script to make sure that it was completely accurate. I think the writer, Dale Launer, had also done quite a lot of research.

NF: How difficult is it to depict the legal process in a film and make it correct [but] where it’s still entertaining and humorous?

JL: What’s difficult is to get studios and producers to agree. They have a cavalier attitude towards the truth. I made another legal film later called Trial and Error. There are some legal errors in that film, and I could not persuade New Line Cinema and … my partner producer—I was one of the producers—I could not persuade them to allow me to make necessary changes which I thought would improve the accuracy of the film and would lead to other comic possibilities.

Read this interview in its entirety at Abnormal Use. Excerpt posted with permission.