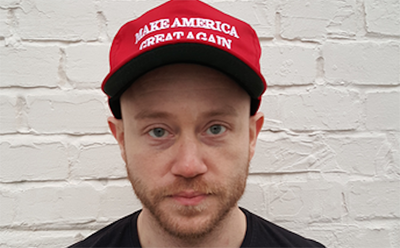 A federal magistrate judge in Montana has ordered a neo-Nazi who can’t be found by process servers to submit proof of “his current whereabouts.”

Anglin, the founder of the neo-Nazi website the Daily Stormer, is accused in a lawsuit of unleashing a “troll storm” against a Jewish real estate agent who had asked the mother of white supremacist Richard Spencer to disavow her son. The real estate agent is represented by the Southern Poverty Law Center.

Lynch’s order notes that Anglin had claimed he can’t file public proof of his location “for reasons of personal safety.” Anglin had contended through his lawyer, Marc Randazza, that he can’t be sued because he has renounced his U.S. domicile and belongs to “no state.” He previously told the court that he has been domiciled in Cambodia, the Philippines and Greece.

The SPLC responded that Anglin produced nothing to show that he could have permanently remained in any of those locations. What information he has so far provided to the court about his most recent location shows him to be “nothing more than a tourist wandering through Southeast Asia,” the SPLC asserted.

Lynch said he reserves ruling on whether the new proof to be submitted will be placed under seal or in the public record.