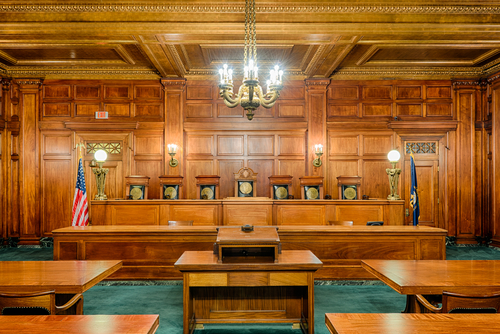 The Supreme Court chamber in the Kentucky State Capitol. Photo from Shutterstock.com.

A newly elected justice on the Kentucky Supreme Court acted “peremptorily, profanely and dyspeptically” in a courtroom outburst while a trial court judge, according to a state appeals court.

The judge, Robert Conley, “loudly slammed his hand on the bench” and “screamed” at the defendant, according to the Nov. 6 opinion by the Kentucky Court of Appeals.

Conley was on the bench in the circuit court for Greenup and Lewis counties in eastern Kentucky at the time, report the Lexington Herald-Leader and the Louisville Courier Journal.

Conley revoked probation for the defendant, James Burns, and imposed a 10-year sentence. The appeals court vacated the probation revocation and ordered Conley to make specific findings of fact to support his decision.

The court also said Conley should conduct himself “in a manner that comports with the rules governing proper judicial conduct as to language, demeanor and dignity of the tribunal.”

Conley was sanctioned by the Kentucky Judicial Conduct Commission in September for his courtroom behavior, according to the Lexington Herald-Leader and the Louisville Courier Journal. In one case, he told a defendant to shut up and ordered him to jail without making written contempt findings.

He told the Louisville Courier Journal at the time that he had served on the bench for 26 years, and this was his first sanction. He also said he had the flu and had exhaustion at the time.

The defendant in the new case had pleaded guilty to theft of more than $500 and being a second-degree persistent offender. Burns’ probationary sentence required residential treatment, but he encountered problems because of a second case he faced in Ohio.

Conley agreed to release Burns to face an outstanding warrant in Scioto County, Ohio, and told him to return to Kentucky afterward for residential treatment.

“Burns set out for Ohio that very day,” the appeals court said. “In fact, he walked!”

Burns later said he turned himself in in Scioto County after walking eight and a half hours hours to get there. Burns was released and told to return for an Ohio court date.

“The bonding agency told him that he had to find a place to stay—without a convicted felon or drug user living there—thus eliminating everyone he knew in Scioto County at the time,” the appeals court said.

Burns turned up at a Presbyterian church, and a church member informed Conley’s Kentucky probation officer about two weeks after his release. Its members brought Burns back to Kentucky. Burns tried explaining the situation to Conley after he was returned to Kentucky.

“At that point,” the Kentucky appeals court said. “the trial judge visibly lost patience, demanding: ‘Is there ever an end to this testimony?’ ”

Conley said Burns had “too many things going on in too many different states.” He had tried to do Burns a favor, Conley said, but Burns tried to get help at the Presbyterian church “instead of coming back here and taking care of your business here. Now I don’t, you may have had a good reason, because maybe that’s what your bonding agent was telling you over there.”

That was the point when Conley slammed his hand on the bench and screamed, “I don’t give a damn about your bonding agent over there. I don’t care about that.”

Conley said Burns was supposed to come back after his Ohio release, but two weeks had passed since that point.

At that point, the appeals court said, Conley “abruptly revoked Burns’ probation and told him to serve his time.”