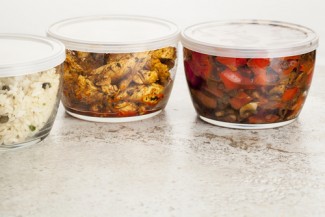 Two former college roommates say they have developed an app that allows individuals to snap a photo of leftover food they don’t intend to eat and offer it to nearby strangers via their smartphones.

When they were students at the University of Michigan, this LeftoverSwap solution to a widespread problem of wasted food might have seemed ridiculous, but it isn’t now, site co-founder Dan Newman told NPR’s All Tech Considered blog. “It was an outrageous joke in 2010, but in 2013, it’s very plausible and something that people would use today.”

There’s just one problem, for those who don’t find the idea of eating food provided by strangers inherently distasteful: Swapping leftovers may be illegal, even if the food is given away for free, the Register reports.

Health officials in San Francisco says its illegal—and dangerous—to sell food without a permit, and “sell” is interpreted to include even free food, according to the Register and SF Weekly The Snitch blog.

And location can also be critical, as some Food Not Bombs activists discovered when they were arrested in 2011 for allegedly handing out free vegan food at a Florida park. Although Orlando officials were willing to allow the food distribution elsewhere, a permit is required to distribute food to groups of 25 or more at a city park, according to the Daily Mail and the Orlando Sentinel.

The charges were later dropped, after the group began distributing food in front of Orlando’s city hall instead, another Orlando Sentinel article noted.

Newman told NPR he is studying up on food regulations and potential liability issues, but notes that the app, which should be up and running by the end of August, doesn’t allow food sales (donations could be offered, though, he says).

“People seem to have a huge lack of trust in their fellow man, thinking that leftovers would be diseased somehow,” he said. “It goes back to the couch-surfing thing. You’re staying at a random person’s place and you have to trust they aren’t going to do something weird. It’s the same with leftovers.”