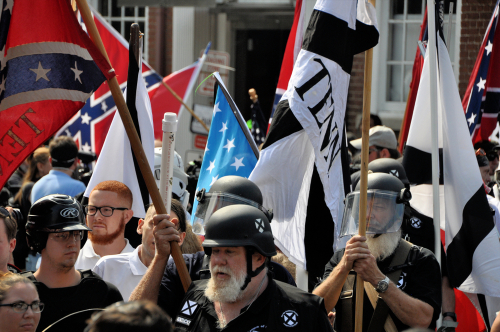 Right-wing extremists, white supremacists and neo-Nazis demonstrated in Charlottesville, Virginia, at the Unite the Right rally on Aug. 12, 2017. (Photo by Kim Kelley-Wagner / Shutterstock.com)

A new online data project is tracking far-right extremism by collecting and aggregating federal and state criminal cases against extremists, including white supremacists and neo-Nazis.

Launched three weeks ago, First Vigil is the creation of Emily Gorcenski, a data scientist and activist. For her, the project was, in part, about her experience as a counter-protester at last year’s Unite the Right march in Charlottesville, Virginia.

A fellow counter-protestor, Heather Heyer, was killed and dozens were injured when a car was driven into a crowd opposing the right-wing march. James Alex Fields was identified as the driver; he has been charged with first-degree murder and multiple charges of malicious wounding, and his state trial is scheduled for Nov. 26 to Dec. 14, NBC 29 reports.

While at the protest in her hometown, Gorcenski and another protester were pepper-sprayed by Christopher Cantwell, one of the event’s speakers and an outspoken white supremacist. He later pleaded guilty to misdemeanor assault and spent three and a half months in jail.

“It’s a very brutal process to be a victim in the criminal justice system,” she tells the ABA Journal. As she went through her process, she started watching other cases stemming from the event and realized they were hard to track.

“What we wanted was a shared resource where people could visualize what’s going on,” she says of the various trials her and her partners were watching.

First Vigil follows the lifecycle of state and federal criminal cases against those known for their affiliation with right-wing extremist groups. Already tracking 75 cases pertaining to 54 defendants dating back to early 2017, she says it’s been a challenge to standardize the information she is pulling from federal, state and local data sources.

However, she hopes that the new project can be a resource for journalists, researchers and victims assaulted by right-wing extremists. She also thinks having the information in one place can help breakdown the idea that violent attacks like Dylann Roof’s massacre of black churchgoers in South Carolina or alleged shooter Robert Bowers’ attack on the Tree of Life synagogue in Pittsburgh are not a series of lone wolf attacks, as they are often portrayed.

Instead, Gorcenski says that perpetrators of these crimes are a part of a well-networked movement, often talking on the same online forums and attending the same events.

The database “can be used to tell the story about white supremacy more accurately,” she says.

“There hasn’t been—up until now—a place where all these prosecutions were in one location,” she says. “She’s made it simpler for all of us to really see what’s going on by going to one location.”

The collection of this data is rare in part because there are roadblocks to access and it’s hard to collect disparate cases across multiple jurisdictions.

Charles Kurzman, a professor at the University of North Carolina at Chapel Hill who studies this issue, says that “the DOJ doesn’t release the docket numbers for domestic cases in the way that it releases international terrorism cases,” which makes it difficult to know the death toll and other information related to the 1,441 federal prosecutions of domestic terrorism in the past 16 years.

He and the Brennan Center for Justice at the New York University School of Law submitted a Freedom of Information Act request earlier this year for the docket numbers of those cases and were denied. They are now suing the DOJ for that information.

Other state and federal law enforcement agencies have been insufficiently tracking this issue, according to recent reporting from the New York Times. In the piece, a police lieutenant from Gainesville, Flordia, looking for law enforcement reports on right-wing extremism called what he found a Bermuda Triangle of intelligence.

Since 9/11, law enforcement has prioritized counterterrorism focused on foreign nationals and Islamic extremists. Even with more attention, tracking these prosecutions is hard because many cases are not labeled as “domestic terrorism,” which means that a simple keyword search is not possible. Instead people are charged with a plethora of drug, weapons and violent crimes, and their ties to extremist groups may not come up in the charging documents or at trial.

At the same time, hate crimes generally are on the rise. The FBI’s recent Uniform Crime Reporting Program’s annual Hate Crime Statistics were released on Tuesday, showing the number of hate crimes reported in 2017 were up 17 percent over 2016. Even with an increase, this number is likely low due to underreporting by victims and law enforcement. The report defines a hate crime as “a committed criminal offense which is motivated, in whole or in part, by the offender’s bias(es) against a race, religion, disability, sexual orientation, ethnicity, gender or gender identity.”

At an event on Oct. 29, Deputy Attorney General Rod Rosenstein said that 88 percent of agencies that provide hate-crimes data to the FBI reported zero hate crimes in 2016. He added that the DOJ was reviewing the accuracy of the reports and that “simply because hate crimes are not reported does not mean they are not happening.”

The U.S. Department of Justice’s hate crime victimization survey published in 2017 found that there were likely 250,000 hate crimes every year from 2004 to 2015. The report defined a hate crime as “incidents confirmed by police as bias-motivated and incidents perceived by victims to be bias-motivated because the offender used hate language or left behind hate symbols.”

With limited and varied data collection, it has been hard to track the impact of particular policies or law enforcement approaches, says Beirich at SPLC.

With the First Vigil project, she says researchers will be able to answer questions regarding the case outcomes of right-wing extremists, like whether or not they receive similar conviction rates or punishments as Islamic extremists. As the database grows, it may also help shine a light on larger, systemic issues, like the impact of the Department of Homeland Security’s decision in 2010 to close its Extremism and Radicalization Branch, as the New York Times reported at the time. The branch came under fire from the political right after issuing a report on the growing anti-government movement at home and potential radicalization of returning veterans.

Currently the driving engine behind the project, Gorcenski is continuing to add cases and increase the features on the website, which she says will include a gallery of photos and video showing a defendant’s affiliation with an extremist group.

Not an attorney herself, she’s looking for help, including from lawyers, who can provide legal context for the cases she tracks.

In the meantime, Gorcenski has moved to Germany and is settling into her new life in Berlin. She left Charlottesville because she faced threats to her personal safety due to her work. Even at a distance, though, her experiences continue to embolden her.

The threats are “proof we need tools like this to monitor these types of individuals,” she says. “In the long term, [First Vigil] will hopefully have the intended effect of limiting white nationalist violence against all people.”