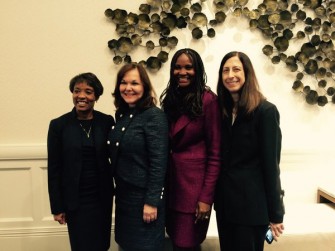 Corrected: At a time when the collective makeup of the legal profession is a matter of ongoing concern, the top leadership ranks of the ABA have never been more diverse than they are now as a result of actions taken Sunday morning by the Nominating Committee.

This is one of the years in which the Nominating Committee selects candidates for all four of the ABA’s top leadership positions: president-elect, chair of the House of Delegates, secretary and treasurer. And this year, all four of the committee’s selections are women, including two African-Americans and one Native American.

The committee’s action sends an important message to the rest of the ABA and the legal profession as a whole, said Hilarie Bass, a shareholder and co-president at Greenberg Traurig in Miami, who was nominated to become president-elect in August (and president a year later) pending her formal election by the House of Delegates when it convenes in San Francisco during the annual meeting.

“One of the challenges of diversity is that we’ve made huge progress in making American law schools more diverse while there is less diversity in law firms,” Bass said. “And that explains why young lawyers, especially women and people of color, are leaving law firms. It’s not just about diversity; it’s about a sense of belonging. Diversity in the ABA’s leadership shows younger lawyers that there is a place for them in the profession.”

The other candidates selected by the Nominating Committee on Sunday are:

Deborah Enix-Ross, an African-American woman who will become chair of the House of Delegates for a two-year term starting in August. Enix-Ross is senior adviser to the international dispute resolution group at Debevoise & Plimpton in New York City.

Mary L. Smith, who will become ABA secretary for a three-year term starting in August 2017. An attorney with the Office of the Special Deputy Receiver in Chicago, Smith is a member of the Cherokee Nation and immediate-past president of the National Native American Bar Association.

Michelle A. Behnke, who will become ABA treasurer starting in August 2017. Behnke, an African-American, is principal of Michelle Behnke & Associates in Madison, Wisconsin. Since she serves on the Nominating Committee as state delegate from Wisconsin, Behnke recused herself from the committee’s vote.

The formal election of all the candidates by the House of Delegates in August is virtually assured.

The Nominating Committee’s action on Sunday continues a recent pattern of diversity in the ABA’s leadership ranks. Patricia Lee Refo, a partner at Snell & Wilmer in Phoenix, is current chair of the House, and the current secretary is Mary T. Torres, a solo practitioner in Albuquerque, New Mexico. In August, Linda A. Klein, the senior managing shareholder in the Atlanta office of Baker, Donelson, Bearman, Caldwell & Berkowitz, will begin serving a one-year term as president. She will follow Paulette Brown, a partner at Locke Lord in Morristown, New Jersey, who is in the middle of her term as the first black woman to serve as ABA president.