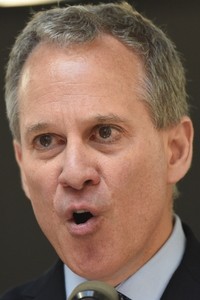 New York’s attorney general says online ticket sales to big concerts or sporting events is “a fixed game” in which “ticket bots” scarf them up by thousands for resale at inflated prices, the Associated Press reports.

“Ticketing, to put it bluntly, is a fixed game,” says the report released Thursday by Attorney General Eric Schneiderman. It details how consumers, whose complaints prompted the investigation, end up paying much more than face value for tickets, if they can get them at all.

For a U2 concert at Madison Square Garden in New York City in 2014, for example, the four-ticket limit was breached by a broker who bought 1,012 tickets in one minute, and that day the broker and others gathered up 15,000 tickets to the group’s North American shows.

These third-party brokers then resell the tickets on sites such as StubHub and TicketsNow with an average markup of 49 percent above face value and up to 10 times face value.

Investigators found that some brokers use illegal software with “ticket bots” to purchase a lot of tickets in a short time.

A spokeswoman for Madison Square Garden said they are aware of the problem and, “While there are no obvious solutions, we continually look for ways to avoid selling tickets to brokers.”

While venues such as Madison Square Garden aren’t affected by the after-market pricing of tickets, some of the acts themselves, such as the Rolling Stones and the Grateful Dead (in its 2015 farewell tour) have found some ways to defeat the scalpers, Billboard Magazine reported last May.

Where once their success was measured in how quickly tickets could sell out, they know they’re going to fill the venues and can, in just one example, throttle sale prices up or down, such as pricing the best seats high enough that risk increases and reward diminishes for secondary-market sellers.

“We manage it in a way that the money goes to the artists, not to the brokers, bottom line,” says John Meglen, co-president of Concerts West, producer of the Rolling Stones’ “Zip Code” tour last year.

For the Grateful Dead’s “Fare Thee Well” reunion tour, producer Peter Shapiro battled the “ticket bots” waiting for the 210,000 tickets to go on sale for three Chicago concerts by reverting to old technology: Buyers could order them by snail mail. The designated post office in Stinson Beach, California suddenly received 70,000 envelopes seeking 500,000 tickets. But then another 100,000 tickets went up for online sale and were gone in an hour—just what the scalpers wanted.

The New York investigation also looked at “price floors” used by professional sports teams that keep tickets from being sold for less than face value. Many NFL teams encourage or require that ticket holders use Ticketmaster’s NFL Ticket Exchange, which prohibits price-cutting.

“The more aggressively sports leagues and individual teams push ticket buyers and sellers to use their ‘official’ secondary markets, the more serious this problem becomes,” the report states.

An NFL spokesman said the NFL Ticket Exchange is just one of many options for buying or selling tickets, and that “The NFL does not require them to use the Ticket Exchange” or restrict ticket fans’ ability to buy or sell tickets “at any price they choose.”

A spokeswoman for the New York Yankees baseball organization echoed that point when asked about the Yankees Ticket Exchange, and added: “It is however the only place where a fan can be guaranteed a safe ticket.”

The Associated Press quotes an unnamed official concerning the investigation, saying the AG’s office is still looking into the NFL platform’s price floor to determine whether it is anti-competitive.