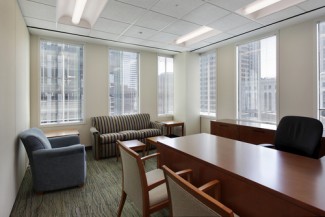 A federal appeals court has upheld a New York law requiring out-of-state lawyers practicing in the state to maintain an office there.

The law does not violate the privileges and immunities clause, the New York-based 2nd U.S. Circuit Court of Appeals ruled on Friday. The Wall Street Journal Law Blog has a story, while How Appealing links to the 2-1 decision (PDF).

The law requires a physical office for out-of-state lawyers, but not for in-state lawyers, who can use their homes as offices. New Jersey lawyer Ekaterina Schoenefeld had claimed the requirement infringed on nonresident lawyers’ right to practice law in the state and violated the privileges and immunities clause.

But the appeals court said the law merely places lawyers living inside and outside the state on an equal footing by requiring all lawyers practicing in the state to have physical premises there.

“Indeed,” Judge Reena Raggi wrote in the majority opinion, “it is Schoenefeld who, in seeking to practice law in New York without a physical presence in the state, is looking to be treated differently from, not the same as, New York resident attorneys.”

The 2nd Circuit cited a 2013 Supreme Court decision that held Virginia does not violate the U.S. Constitution when it bars out-of-state residents from accessing state records through its Freedom of Information Act. The Virginia law had an incidental effect on the ability of outsiders to profit from information contained in state records, but there was no proof the law was intended to give Virginia citizens a competitive advantage, the Supreme Court said.

Similarly, the New York law was not enacted for a protectionist purpose, Raggi said. The office requirement had its origins in a predecessor law intended to reverse a court ruling that barred a New York lawyer who moved from New York to New Jersey from continuing to practice law in the state.