Newlywed charged in death of her husband of a week 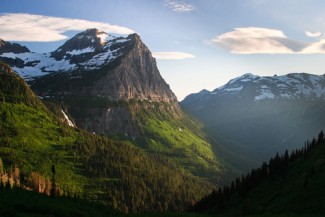 A Montana woman has been charged with pushing her new
husband off a cliff in Glacier National Park. Image from
Shutterstock.

A Montana woman has been charged with pushing her new husband off a cliff in Glacier National Park only a week after they were married.

Jordan Linn Graham, 22, was arraigned Monday in federal court in Missoula on a second-degree murder charge in the death of her husband, Cody Lee Johnson, ABCFoxMontana.com reports.

Johnson, 25, was reported missing July 8 when he failed to show up for work. His body was found at the bottom of a cliff in Glacier National Park on July 12.

Charging documents stated that Graham had texted a friend on July 7 to say she was having second thoughts about having married Johnson. She told the friend she intended to discuss the matter with Johnson that night. She followed that up with another text message saying: “But dead serious. If you don’t hear from me at all again tonight, something happened.”

Graham initially told police that Johnson left the house with friends on the night in question. But she later admitted to FBI agents that she pushed him off the cliff “with both hands” during an argument.