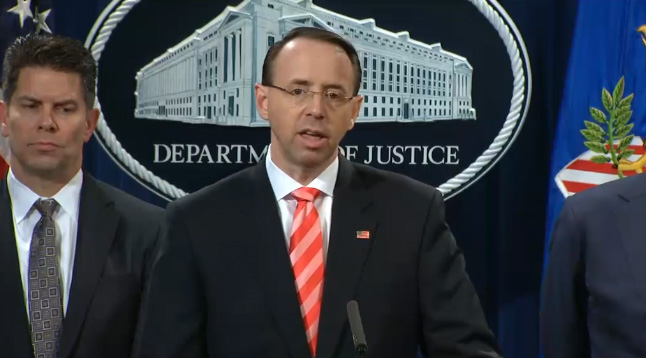 The indictments were announced by Deputy Attorney General Rod Rosenstein, U.S. Attorney Geoffrey Berman of the Southern District of New York and other officials. The hacked law firm was not named. Rosenstein’s remarks are here and a press release is here.

The hackers were working for the Mabna Institute, a group founded to help Iranian universities access scientific research, Rosenstein said. The group gave the information to the Islamic Revolutionary Guard Corps, one of several Iranian entities that gather intelligence, which used the information or sold it, according to Rosenstein.

The hackers are accused of obtaining information from about 320 universities in 22 countries, including 144 American universities. The defendants stole research that cost the universities about $3.4 billion to procure and maintain, Rosenstein said.

Hackers used a “password spraying” technique to access the private entities. It worked this way: Hackers would collect names and email accounts associated with the targeted company, then it would try commonly used passwords to access the accounts. After hacking into an email, the hackers “exfiltrated entire email mailboxes from the victims,” the press release says. In many cases, the hackers set up automatic forwarding rules for compromised email accounts that allowed the hackers to receive all incoming and outgoing email messages from the accounts.

All the defendants are citizens and residents of Iran.