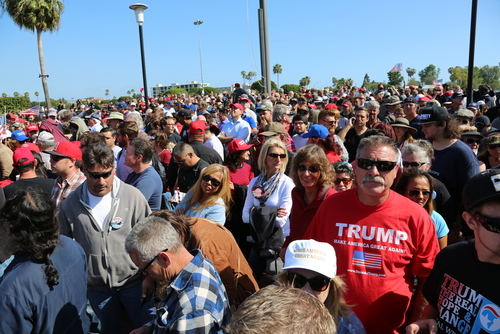 The San Francisco-based 9th U.S. Circuit Court of Appeals ruled Friday that supporters of President Donald Trump may continue a lawsuit alleging police intentionally steered them into an “unruly mob” of protesters who injured them.

The Recorder reports that the three-judge panel unanimously affirmed the ruling of U.S. District Judge Lucy Koh of the Northern District of California by denying qualified immunity to police officers for the city of San Jose, California. Those officers are accused of directing 20 plaintiffs into a violent crowd in June 2016 outside a Trump campaign rally. Then, the plaintiffs say, the seven officers stood by and did nothing while the rally attendees were physically struck and hit with objects.

According to the complaint, police directed people attending the rally to the east-northeast exit of the McEnery Convention Center, where a police line directed them north into a crowd of anti-Trump protesters. The police actively prevented plaintiffs from going south. The crowd disagreed with and insulted the Trump rally-goers—whose activities protected by the First Amendment—but crossed a line into physical violence, the complaint says.

“Being attacked by anti-Trump protesters was only a possibility when the attendees arrived at the rally,” wrote Senior Judge Dorothy Wright Nelson, joined by Judges Andrew Kleinfeld and William Fletcher. “The officers greatly increased that risk of violence when they shepherded and directed the attendees towards the unruly mob waiting outside the Convention Center.”

The complaint details some of the injuries. A 71-year-old woman was attacked by three protesters who pulled her hair and broke her glasses. Another plaintiff, then a 14-year-old boy, was hit twice before running to a San Jose fire department vehicle to ask for help. After he was denied, the complaint says another protester tackled him.

Other rally attendees suffered a concussion, a broken nose and were involved in a confrontation in which the person was physically surrounded and trapped by protesters, the complaint says. The lawsuit alleges that law enforcement ignored the violence on the orders of city officials or their agents, which deprived the plaintiffs of their rights to free speech, freedom of assembly and due process. They seek an injunction against any further such behavior, as well as compensation.

The 9th Circuit also permitted claims against the city of San Jose to go forward. In that case, the Recorder says, it declined to touch Koh’s ruling on the subject, saying it had no jurisdiction. San Jose City Attorney Richard Doyle told the Recorder in 2016 that those claims were meritless and that the police did everything they could under the circumstances.

Harmeet Dhillon, the plaintiffs’ attorney and a member of the Republican National Committee, sees that issue differently.

“Regardless of whether you’re a supporter of Donald Trump, every citizen should cheer that our government will be held accountable in cases where they put citizens in harm’s way,” she said.

At least one other lawsuit over violence at a Trump rally has reached the federal appeals courts: In November, the Cincinnati-based 6th U.S. Circuit Court of Appeals agreed to hear an appeal from Trump and his campaign of an order allowing a lawsuit against them to go forward. In that case, then-candidate Trump is accused of inciting his supporters to attack protesters, Politico says.