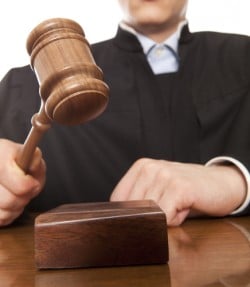 A judge accused of trying two defendants without a prosecutor or defense lawyers may have shed his immunity to a civil rights suit, a federal appeals court has ruled.

The Philadelphia-based 3rd U.S. Circuit Court of Appeals ruled against Municipal Judge Louis DiLeo of Linden, New Jersey, who was not reappointed to his post after the incident, the New Jersey Law Journal reports.

A trial judge had denied DiLeo’s motions to dismiss on the grounds of absolute judicial immunity and 11th Amendment immunity, and the 3rd Circuit affirmed. The civil rights plaintiffs—who were convicted in the unusual trial—had made out a plausible claim that DiLeo’s actions “went beyond legal error, such that he was no longer functioning in his judicial capacity,” the appeals court said in the Sept. 10 nonprecedential opinion (PDF). The appeals court also allowed claims against the city of Linden.

The Kirklands say the trial began at 9:13 p.m. on May 12, 2010, and wrapped up in less than an hour. It is undisputed that neither the prosecutor nor defense lawyers were present, according to the trial judge’s opinion in the case. DiLeo allegedly told the defendants on a prior occasion that they had waived their right to a public defender after they earlier said they would retain private counsel.

During the trial, DiLeo questioned the arresting officer and allowed cross-examination by the defendants. After the officer’s testimony, DiLeo asked the Kirklands if they had evidence, and they said they had witnesses but they were not present. DiLeo proceeded anyway, according to the lower court opinion.

DiLeo then advised the Kirklands of their Fifth Amendment right against self-incrimination and allowed them to testify. Both did so, and they were cross-examined by the arresting officer. DiLeo then questioned Anthony Kirkland. At the conclusion of the trial, DiLeo found both defendants guilty. Their convictions were later vacated.