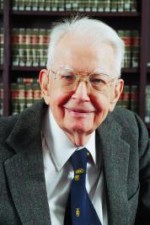 A University of Chicago law professor and economist who wrote the most-cited law review article of all time has died at the age of 102.

Ronald Coase died on Monday, report the New York Times, the Wall Street Journal Law Blog (sub. req.) and the New Yorker blog Rational Irrationality. He won the Nobel Prize for economics in 1991 and published “The Problem of Social Cost” in 1960, which was ranked last year as the most-cited law review article of all time, the Law Blog says.

In the paper, Coase argued that government intervention wasn’t needed to stop companies or parties from harming others, the Times explains. He argued that the affected parties could negotiate their own satisfactory resolutions if they had all the relevant information, and that such resolutions might make more economic sense.

According to Rational Irrationality, Coase “was transformed into an icon of the political right. His famous ‘Coase theorem’ was used to justify a hands-off approach to big business on the part of politicians, regulatory agencies, and judges, leaving pollution and other economic problems to the corrective powers of the free market.” In reality, the blog says, Coase admitted that his theorem didn’t necessarily apply to industrial pollution, where those affected are numerous, and he didn’t believe in laissez-faire.