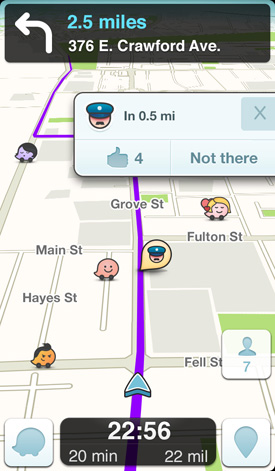 An example of a police alert on the Waze app. Image courtesy of Waze.

In a letter sent to Google last weekend, the New York Police Department threatened legal action if the technology company ignored demands to remove a feature on its Waze app that allows users to post locations of police checkpoints.

Ann Prunty, the acting deputy commissioner for legal matters, wrote in the Feb. 2 letter, obtained by StreetsBlog and covered by the New York Post and CNET, that the “posting of such information for public consumption is irresponsible since it only serves to aid impaired and intoxicated drivers to evade checkpoints and encourage reckless driving.”

Prunty also said in the letter that people who alert drivers to driving-while-impaired checkpoints in the crowd-sourced app could be engaging in criminal conduct “since such actions could be intentional attempts to prevent and/or impair the administration of the DWI laws and other relevant criminal and traffic laws.”

The New York Post said the cease-and-desist letter could also apply to Waze’s “speed cam” function, which allows people to alert other drivers about speed traps and red-light cameras in their area.

In a statement provided to the New York Post on Wednesday, Google said “informing drivers about upcoming speed traps allows them to be more careful and make safer decisions when they’re on the road.”

The American Civil Liberties Union also told the New York Post that “much as the police may not like it, the public has a First Amendment right to warn others about police activity.”

Waze was acquired by Google in 2013. Its “police” feature first faced scrutiny in 2015 from New York’s Sergeants’ Benevolent Association and the National Sheriffs’ Association, which said it could put police officers’ lives in danger, the New York Post said.