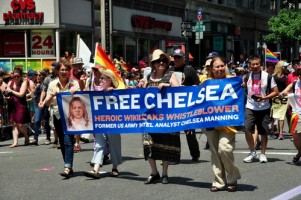 President Barack Obama has commuted much of the remaining sentence for Chelsea Manning, who has served nearly seven years of a 35-year sentence for leaking classified information.

Manning will be freed May 17, the New York Times and the Washington Post report.

Manning, as an Army intelligence analyst, leaked hundreds of thousands of classified documents to WikiLeaks. The military documents included revelations about abuses of detainees by Iraqi military officers working with the United States, and the likely underassessment of civilian casualties in the Iraq war.

Military prosecutors had argued at trial that Manning’s leaks severely damaged U.S. secret intelligence and the soldier should receive a 60-year sentence. The defense portrayed Manning as well-intentioned.

Manning is a transgender woman who was originally known as Bradley Manning. According to the Times, the commutation has “relieved the Department of Defense of the difficult responsibility of her incarceration as she pushes for treatment for her gender dysphoria—including sex reassignment surgery—that the military has no experience providing.”

Manning was convicted in July 2013 of violating the Espionage Act, but acquitted on a more serious charge of aiding the enemy, which carried a potential life term.

Manning’s commutation was among 209 commutations and 64 pardons granted by Obama on Tuesday, report the Chicago Tribune and USA Today.

During his time in office, Obama has pardoned a total of 212 people and commuted the sentences of 1,385 federal inmates. Of today’s 209 grants, 100 were supported by Clemency Project 2014, which has enlisted volunteer lawyers to help prisoners submit clemency petitions. A press release is here. The ABA is among five groups involved in the effort.

Among those receiving full pardons was former general James Cartwright, convicted of lying to the FBI about a leak involving a U.S. and Israeli cyberattack on Iran’s nuclear program. Also receiving a pardon was baseball Hall of Famer Willie McCovey, who pleaded guilty to tax evasion in 1995.

Upon hearing the news that Oscar Lopez Rivera—who was leader of the Puerto Rican independence group FALN and convicted of seditious conspiracy to overthrow the U.S. government in 1981—would be receiving a pardon, Lin-Manuel Miranda, creator of the hit musical Hamilton, said he would step into the title role in a Chicago performance for Lopez Rivera, the Chicago Tribune reported.

Updated at 5 p.m. to note the commutation of Lopez Rivera’s sentence and Miranda’s announcement.

Next:
Legal filing marks end of the road for European arm of King & Wood Mallesons