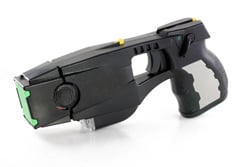 Seattle police officers are asking the U.S. Supreme Court to grant cert and rule they did not use excessive force by using a Taser stun gun on a pregnant woman who would not get out of her car.

The justices are expected to consider whether to hear the case next week, the New York Times reports.

The woman, Malaika Brooks, was seven months pregnant when she was pulled over for going 32 miles an hour, 12 miles an hour over the limit in a school speed zone, according to the story. She refused to sign the ticket, as required by state law, and refused an order to exit the vehicle. Officers tried removing her by shocking her with a Taser, first in her thigh, then her arm, and then her neck.

The en banc San Francisco-based 9th U.S. Circuit Court of Appeals ruled that police used excessive force, but they had immunity because the law was unclear. In dissent, Chief Judge Alex Kozinski disagreed on the excessive force finding, saying the officers deserved praise and “commendations for grace under fire.”

Though the officers won on immunity grounds, they contend in their cert petition (PDF) that the 9th Circuit decision “effectively strips officers of the authority to use any pain compliance technique to control an actively resisting arrestee.” Several police groups are also asking the court to grant cert. The case is Daman v. Brooks.

ABAJournal.com: “Seattle Battles Its Own Attorney in Dispute Over US Supreme Court Appeal in Excessive-Force Case”