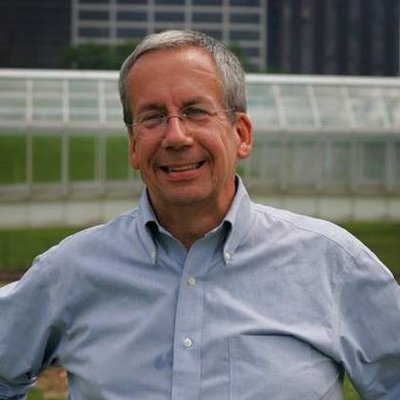 Updated: An Ohio Supreme Court justice who is running as a Democrat for governor has created a firestorm in a Facebook post asserting he was “sooooo disappointed by this national feeding frenzy about sexual indiscretions decades ago.”

Justice Bill O’Neill wrote the post Friday, the Cincinnati Enquirer and the Dayton Daily News report. “Now that the dogs of war are calling for the head of Senator Al Franken, I believe it is time to speak up on behalf of all heterosexual males,” he said.

He went on to say he has been “sexually intimate with approximately 50 very attractive females” during the last 50 years. One woman was “a gorgeous blonde” with whom he made love in the hayloft of her parents’ barn, and another was a “drop dead gorgeous red head,” he said.

O’Neill confirmed that he wrote the post. It was shortened from a previous version with more identifying information about two women he mentioned.

Four hours after he posted, more than 350 people had commented. “Your attitude toward women who are finally brave enough to speak out about their experiences is disgusting,” one commenter wrote.

The reaction extended beyond Facebook. O’Neill’s campaign manager tweeted his resignation, three women running for governor as Democrats called for O’Neill to resign, and Ohio Chief Justice Maureen O’Connor issued a statement condemning the Facebook post “in no uncertain terms.”

“No words can convey my shock,” O’Connor wrote. “This gross disrespect for women shakes the public’s confidence in the integrity of the judiciary.”

“As an aside for all you sanctimonious judges who are demanding my resignation, hear this. I was a civil right lawyer actively prosecuting sexual harassment cases on behalf of the Attorney General’s Office before Anita Hill and before you were born.

“Lighten up folks. This is how Democrats remain in the minority.”

Then on Saturday, O’Neill offered this apology: “If I offended anyone, particularly the wonderful women in my life, I apologize. But if I have helped elevate the discussion on the serious issues of sexual assault, as opposed to personal indiscretions, to a new level … I make no apologies.”

He later deleted the Saturday apology and apologized a second time on Sunday. He wrote: “There comes a time in everyone’s life when you have to admit you were wrong. It is Sunday morning and I am preparing to go to church and get right with God. But first I have to get right with my family, my friends, and the thousands of strangers who have been hurt by my insensitive remarks. I am sorry. I have damaged the national debate on the very real subject of sexual harassment, abuse and unfortunately rape. It is not a laughing matter. It wasn’t when I prosecuted sexual misconduct for the state of Ohio, and it is not now.”

O’Neill went on to apologize to his daughters and sisters “for dragging you into this matter. You deserved better treatment than this, I love you, respect you, and yes. I was wrong. Thanks you for loving me enough to stand up to my departure from a loving life.”

O’Neill told Cleveland.com he never thought his original post would go viral. “I became a villain overnight,” he said. He added that he was not apologizing for sticking up for Franken.

O’Neill said he wasn’t sure if a forceful kiss during a comedy skit amounted to an assault. “Honestly, I think if somebody is forcefully kissed and didn’t want to kiss, she should poke him in the eye right on the spot,” O’Neill said.

Franken, a Minnesota Democrat, has been accused of forcibly kissing a fellow entertainer in 2006 while practicing a skit on a USO tour. The woman also says Franken groped her breasts while she was asleep and chronicled the misconduct in a photograph.

Another woman, Lindsay Menz, told CNN in a story published Monday that Franken grabbed her buttocks in 2010 while taking a photo at the Minnesota State Fair. Menz’s father and husband both said Menz told them about the grab after it happened. She also posted the photo on Facebook, and when her sister commented on how close they were to each other, Menz commented, ” “Dude—Al Franken TOTALLY molested me! Creeper!”

It was the first time Franken was accused of improper touching while in office. Franken said he didn’t remember the incident but he felt “badly that Ms. Menz came away from our interaction feeling disrespected.”

O’Neill was already creating controversy by remaining on the Ohio Supreme Court while running for governor. The Ohio Code of Judicial Conduct requires judges running for partisan office to resign; O’Neill contends the ethics rule doesn’t apply to him because he has not yet filed his petitions for candidacy, according to the Dayton Daily News.

O’Neill has previously said he will drop out of the race if Richard Cordray decides to run. Cordray has announced he is resigning as director of the U.S. Consumer Financial Protection Bureau.

An Ohio legislator who had introduced a resolution seeking O’Neill’s removal from the court because of his candidacy has raised new concerns, the Toledo Blade reports. Republican Rep. Niraj Antani said that, by taking a position on Franken, O’Neill “has conflicted himself on every sexual harassment, every rape case, every sexual assault case. He can no longer rule on any of those cases.”

O’Neill posted a link to the Toledo Blade story on his Facebook page. “I would suggest he read the Ohio Constitution, or if he can’t, have someone read it to him,” O’Neill said of Antani.

O’Neill told the Toledo Blade he was “unaware of any provision in the Ohio Constitution for removing a duly elected justice for exercising his free speech rights.”

O’Neill’s original Friday post, which was later taken down: 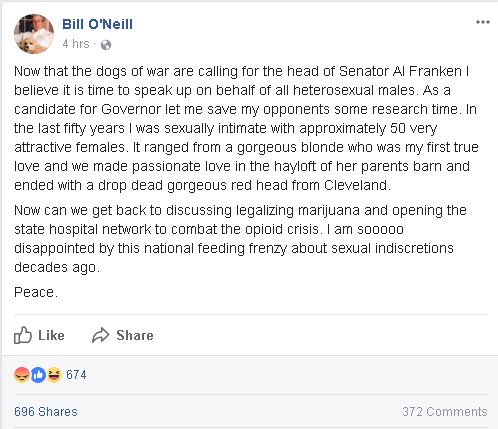