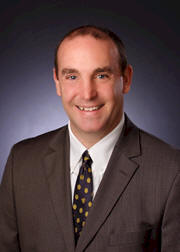 Photo of Erik Chappell courtesy
of his law firm’s site.

Updated: A lawyer and his two sons were injured in an apparent car bomb blast in Monroe, Mich., on Tuesday.

The lawyer, Erik Chappell, was released from the hospital today, but the boys are seriously injured and remain at St. Vincent Mercy Medical Center in Toledo, according to MonroeNews.com. Unnamed sources tell the publication the boys are Chappell’s sons, ages 11 and 13.

Chappell is a football coach in the Monroe area’s Catholic Youth Organization, and he was apparently driving the boys to practice. “It was believed that Mr. Chappell was able to drag his sons from the car, which quickly became engulfed in flames,” MonroeNews.com says. The bomb was believed to be placed under the passenger seat, causing serious injuries to one of the boy’s lower legs, the story adds.

The Toledo Blade also identifies the victims as Chappell and his two sons. Earlier reports by the newspaper said the boys were unidentified.

Chappell is a litigator at Lyden, Liebenthal & Chappell, with offices in Sylvania, Ohio, and Monroe, Mich. He handles primarily business disputes, including employment matters, according to his firm’s website. He also has a family law practice. Monroe is about 20 miles north of Toledo, the Associated Press reports. Chappell is licensed in both Ohio and Michigan.

According to MonroeNews.com, federal agents have told lawyers not to discuss the case. The Bureau of Alcohol, Tobacco, Firearms and Explosives is offering a $10,000 reward for information.

Updated at 11:55 a.m. to reflect updates in the Toledo Blade and an Associated Press story.