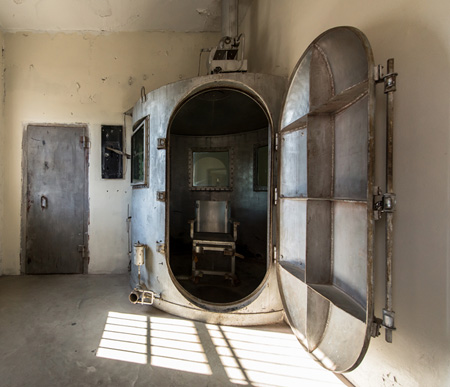 The gas chamber at the Wyoming Frontier Prison, Rawlins, Wyoming, in 2012. (Nagel Photography/Shutterstock.com.)

Oklahoma Attorney General Mike Hunter says the state can no longer “sit on the sidelines” and wait to find drugs for executions by lethal injection.

The state will instead turn to nitrogen gas, Hunter said in a news conference on Wednesday. The New York Times, the Washington Post, The Associated Press and NewsOK have stories.

The state will begin to develop a protocol for gas executions, a backup method authorized by the state in April 2015. The gas would likely be delivered by a mask placed over the inmate’s head.

Corrections Director Joe Allbaugh said at the news conference that lethal injection drugs are so hard to find that he was forced to deal with “seedy individuals” during his search.

“I was calling all around the world,” he said.

Oklahoma isn’t the only state considering back-up methods of execution if lethal injection drugs can’t be found. Tennessee has authorized the electric chair and Utah has approved firing squads. Arizona, California, Missouri and Wyoming allow the gas chamber as a backup method.

Baich said in a statement that the state “must proceed with due diligence.”

“This method has never been used before and is experimental,” he said. “Who are the experts on nitrogen and nitrogen hypoxia who will be brought in? What research has the state undertaken to ensure the safety and legality of this new process? Without complete transparency, we have no assurance that executions won’t continue to be problematic.”