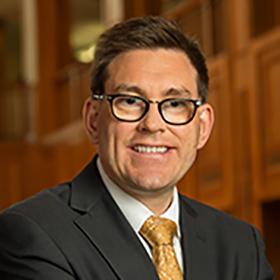 A law professor and associate dean for academic affairs at the Oklahoma University College of Law voluntarily resigned Tuesday after his discriminatory writings about women and same-sex marriage in a 2014 book came to light.

The controversy stems from Brian McCall’s book titled To Build the City of God: Living as Catholics in a Secular Age, reports Above the Law. KFOR-TV and the Oklahoma Daily, a student-run newspaper, also have stories.

In a chapter titled “Modest Contact With the World: Women In Pants and Similar Frauds,” McCall wrote, “Women must veil their form to obscure its contours out of charity towards men… To know that women in pants have this effect on men and to wear them is thus a sin against charity as well as modesty.”

Since 2011, women have comprised between 40 and 45 percent of each law class, according to the school’s website.

In another passage, McCall called same-sex marriage “insanity” and wrote “A society that cannot distinguish between a marriage and a perversion of nature has lost all grip on reality.”

After an independent review, though, the university’s Equal Opportunity Office found no evidence of workplace harassment or discrimination by McCall.

It reads, in part, “The OU College of Law is a place of inclusion. Beyond ensuring the college is free from illegal harassment or discrimination, the college must prepare tomorrow’s leaders – our students – for the world in which they will serve,” wrote the dean. “It would be a disservice to them if we did not provide an educational experience that presents diverse subject matter, encourages thoughtful conversation and debate, and prepares them to practice in an increasingly diverse world.”

The Norman Transcript reports Wednesday that Harroz plans to meet with faculty, staff and students on the matter.

In September, the Oklahoma Daily published a piece saying that McCall was named editor-in-chief of Catholic Family News, an organization the Southern Poverty Law Center classifies as a hate group because of anti-Semitic commentary published under a previous editor, John Vennari.

“The newspaper will follow the direction (Vennari) set for decades and that direction does not and will not involve bigotry or injustice against any people on the grounds of race or ethnicity,” McCall said.

It is unclear if McCall retains any role at the college. A biography states that McCall joined the college of law in 2006 and was awarded tenure in 2012.

The school’s director of communications did not immediately respond to a request for comment.