Kennedy is considered tie-breaker in DOMA case; is a Roberts ruling possible? 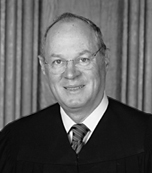 Court watchers will be following the remarks of Justice Anthony M. Kennedy when the U.S. Supreme Court takes up gay marriage again today, this time in a challenge to the Defense of Marriage Act banning federal benefits for same-sex married couples.

The plaintiff, Edith Windsor, had to pay an estate tax of about $360,000 because her same-sex marriage in Canada was not recognized under DOMA. Previews of the case by the New York Times and the Washington Post mention the role likely to be played by Kennedy. He wrote Lawrence v. Texas, which overturned a Texas law criminalizing gay sex, and Romer v. Evans, which struck down a Colorado constitutional amendment barring laws that protect gays. But some observers go further, suggesting Chief Justice John G. Roberts Jr. will be writing an opinion striking down DOMA.

Yesterday, when the Supreme Court considered the constitutionality of California’s voter-approved ban on gay marriage, Kennedy said the court was in “uncharted waters” and suggested the case should be dismissed, according to coverage by the Washington Post. After watching the oral arguments, SCOTUSblog founder Tom Goldstein predicted the court would dismiss the California case or find that supporters of the Proposition 8 initiative did not have standing.

But court watchers see another possibility in the DOMA case, according to the Times. “In the Windsor case, two of Justice Kennedy’s central concerns—states’ rights and gay rights—may be said to align, and many observers predict that he will vote to strike down the law,” the story says.

A few observers, however, say Kennedy won’t be determinative. They predict that Roberts will be writing at least the DOMA opinion.

In a Huffington Post article written before oral arguments yesterday, Kmiec predicted Roberts would write two 6-3 opinions overturning DOMA and the California initiative. “Why might the chief justice side with the opponents of Prop 8?” Kmiec wrote. “Largely, as in the health care ruling, to control the scope of the majority opinion, and in particular to manifest as much sensitivity as possible toward religious freedom. It is one thing to say the discrimination under DOMA is irrational in giving estate tax exemption to traditional, but not same-sex, partners; it is quite another to conclude that all religions would then have to set aside doctrinal or scriptural interpretations contrary to homosexual behavior.”

Next:
Can a brain scan predict recidivism? Low activity in one brain region is linked to rearrest