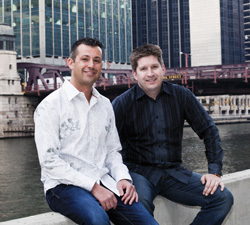 Is your spouse hogging the new car? Or refusing to do the dishes? Now you can take your dispute to an online jury of your peers at a new website called JabberJury.com.

Fast Company calls the website “The People’s Court for the Facebook generation,” while a press release dubs it “a true people’s court.” It’s the brainchild of Chicago entrepreneurs Kevin Wielgus and Angelo Rago, who came up with the idea after Rago settled an argument with his girlfriend by asking bar patrons to weigh in. The dispute: Did his girlfriend have a right to be mad when he refused to visit her father in the hospital? (He was suffering from hemorrhoids, not a life-threatening disease.)

Recent cases posted at the website raise age-old questions such as: Are dogs superior to cats? What’s the need for all those decorative pillows on the bed? And what’s the big deal about chewing with your mouth open?

The website chooses one conflict as its case of the day, according to the press release. Litigating parties submit their case via video uploads. JabberJurors can post their comments, or “outbursts,” or heckle the parties. Litigants and jurors on the winning side of a case get credits called “Jabbies” that can be redeemed for prizes or donated to charity.

Rago and Wielgus developed the website with $120,000 in cash from their families and $1.2 million in private funding.