Only 1.2% of Chicago police complaints lead to suspension or firing, new data says 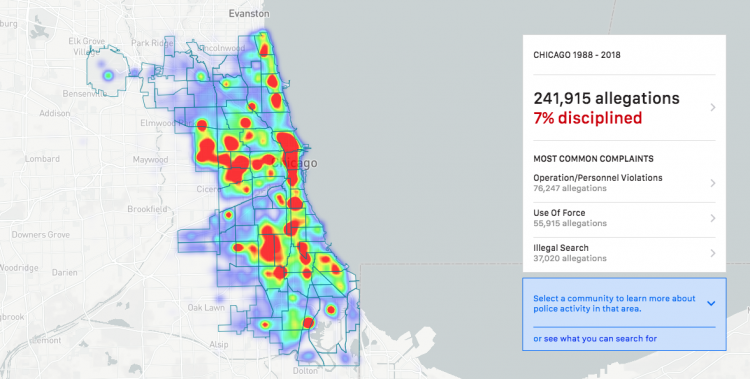 Updated: A public data project tracking the allegations of abuse against the Chicago Police Department has quadrupled in size, bringing alarming trends to light.

The Citizens Police Data Project, curated by the Invisible Institute, a journalism production company, released new data on how ineffective police complaints are and the demographic makeup of those making the complaints.

From 2000 to 2016, only 1.2 percent of civilian complaints against all officers accused of misconduct (1,360 of 111,698 cases examined) resulted in a suspension or firing, according to the institute. When it came to the 8,700 excessive force complaints brought between 2007 and 2016, only 1.5 percent were found in favor of the complainant. Rates were even lower in poorer neighborhoods, where many residents make less than $1.25 a day, according to a press release.

“We’ve seen tremendous public benefit from this database,” said Jamie Kalven, founder of the Invisible Institute. “The greatly enlarged and enriched data now available will make it even more powerful as a tool for holding law enforcement agencies accountable.”

The data making up this project is the product of multiple lawsuits between advocates—including Kalven—and the City of Chicago, the Chicago Police Department and the Fraternal Order of Police, the city’s law enforcement union.

After successful litigation in 2014, the first version of this database was released in November 2015. Then the city of Chicago attempted to release all misconduct data dating back to 1967; however, the Fraternal Order of Police temporarily blocked this effort and sought to destroy older records—an attempt that ultimately failed.

The project now includes 240,000 misconduct allegations concerning 22,000 Chicago Police officers spanning the past 50 years, according to the release.

Updated at 8:35 a.m. with information on cases examined