Only 25 percent of lead counsel roles in New York courts are held by women, study finds 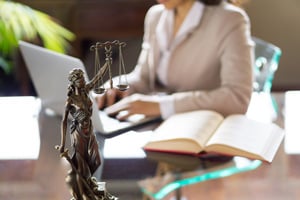 Women are lead counsel in only 25 percent of cases in courtrooms across New York state, a study by the state bar has found.

Former U.S. District Judge Shira Scheindlin is a member of a New York State Bar Association section task force that prepared the study report. “The results reveal that women remain woefully underrepresented in the courtroom—particularly in the private sector,” she said in a press release. “The time has come to turn things around. We look forward to seeing a real improvement when we repeat the study in two years.”

The study asked judges to track the participation of women as lead counsel and trial lawyers in civil and criminal matters, and it included both federal and state courts. About 2,800 judges completed questionnaires for the study, which took place over the last four months of 2016.

According to the study report, “The low percentage of women attorneys appearing in a speaking role in courts was found at every level and in every type of court: upstate and downstate, federal and state, trial and appellate, criminal and civil, ex parte applications and multi-party matters.”

In the public sector, which consisted mainly of criminal matters, women accounted for 38.2 percent of lead counsel, and to 19.4 percent of lead counsel in the private sector, which included both civil and criminal matters according to the study by the state bar’s Commercial and Federal Litigation Section. (A summary of the findings is in a table on page 31 of the report.)

“In short,” the report said, “the more complex the case, the less likely that a woman appeared as lead counsel.”

Women lawyers fared better in their representation at the New York Court of Appeals, the state’s highest court. The survey found women accounted for 39.4 percent of the 137 lawyers who appeared there.

A second part of the study asked alternative dispute resolution about gender. In a sample of 589 cases, women were selected as arbitrators 26.8 percent of the time and as mediators about half the time.

The courtroom findings track the results in an ABA study of federal cases filed in 2013 in the U.S. District Court for the Northern District of Illinois. It found that women made up 33 percent of lawyers appearing as lead counsel in criminal cases and 24 percent of lead counsel in civil cases.