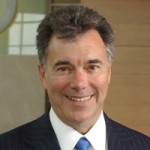 Updated: In a move intended to help Orrick Herrington & Sutcliffe reconfigure its model of success for the 21st century, the law firm has announced that it will no longer publicly report its average profit per partner.

“We are not going to participate any longer in the BigLaw derby to see who can post the highest numbers,” chairman and CEO Ralph Baxter tells the ABA Journal. And the benchmark PPP figure, he says, “is not a metric that aligns with controlling expenses and trying to be one single firm around the world.”

Even those within the firm won’t be apprised of its PPP in the future, he states, although Orrick partners, of course, will be provided with all of the firm’s financial data from which it can be derived.

For a number of reasons, Orrick decided that PPP was no longer an accurate or appropriate figure to use in measuring its success as a law firm as it moves forward to redesign itself to succeed in a rapidly changing legal landscape, according to Baxter. Hence, the firm is developing new metrics for this purpose and it is making the announcement now, well before the end of 2010, to make clear that the change has nothing to do with the firm’s financial performance this year, he explains.

“Our partnership is engaging in a serious dialogue to identify more appropriate metrics to evaluate our firm, to strengthen our client relationships, and to make our lawyers’ careers even more meaningful,” Baxter said in a press release.

The 1,100-attorney San Francisco-based international firm last year reportedly had an average profit per equity partner of $1.36 million and annual gross revenue of $845.7 million, Bloomberg reported. The planned change in benchmarks doesn’t signal any expected change in the way partners are compensated, Baxter tells the ABA Journal: “Our partners are and continue to be among the most highly compensated partners of the major firms, as reflected in the data that has been published all these years.”

That said, the firm, as one unified team, needs to be mindful of a set of metrics that all can strive to improve, Baxter says. Among the criteria that he expects Orrick to focus on in developing the new standards are keeping costs down for the firm and its clients; enhancing its client relationships; its market share of the law practice business; and how effectively it is deploying its diverse practice areas and office locations to benefit clients.

By setting new standards, Orrick will further enhance the financial success of the firm, Baxter says, since everyone at the law firm will now be focusing on optimal benchmarks rather than managing for an arbitrary metric, such as PPP, that doesn’t reflect its big-picture priorities.

Other aspects of the firm’s continuing redesign for the 21st century, he says, include its elimination of lockstep pay and the establishment of its global operations center in Wheeling, W.Va.

Above the Law: “Orrick Will Abandon Publishing Profits Per Partner Next Year”

Updated on May 13 to include information from Ralph Baxter interview and link to subsequent Above the Law post.