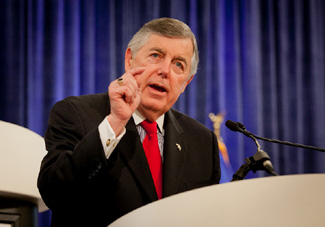 Robinson said a newly created ABA Task Force on the Future of Legal Education will make recommendations in the next two or three years on changes to improve legal education.

“Law students and young lawyers are understandably concerned as they begin their careers in such a difficult economy and feel especially vulnerable to downward shifts in the marketplace,” Robinson said.

• A symposium on court funding that brought together public policy experts, lawmakers, judges, academics and lawyers.

• A general counsel summit with the U.S. Chamber of Commerce to raise awareness about the economic consequences of court budget cuts.

• Delivery of the ABA message in support of the courts in more than 50 articles, editorials and letters to the editor.

• A new website on court funding and a toolkit for state bar leaders to help educate the public.

“But there is still much work to be done,” Robinson said. “Just in 2011, 42 states decreased annual funding for their state courts. And as I speak, the state courts in Kentucky are closed today for the first time since my state’s modern court system was formed in 1976.”

Corrected at 2:05 p.m. to state that the name of the new task force is the ABA Task Force on the Future of Legal Education.