How can tensions between minorities and police be addressed? Reforms proposed 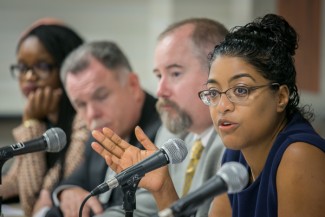 Tension between police and racial minorities, which has been significantly exacerbated by a recent series of fatal police shootings in places like Baltimore and Ferguson, Missouri, won’t be solved overnight. However, promoting concepts such as procedural justice, transparency and accountability could go a long way toward reducing these tensions.

That was one of the main findings from a diverse panel discussion held at the ABA Annual Meeting in Chicago on Friday that included law enforcement personnel, academics and protesters. The panel examined some of the root causes of police violence and proposed ways to help solve the long-simmering and historic tension between police and minority communities. Sponsored by the American Bar Foundation, the panel was moderated by Peggy Davis, chief officer of programs and strategic integration at the Chicago Community Trust, and consisted of professor Craig Futterman of the University of Chicago Law School; the superintendent of the Chicago Police Department, Garry McCarthy; Tracey Meares, a professor at Yale Law School; the executive director of Teach for America for St. Louis, Brittany Packnett; and the chief legal counsel for the Illinois Police Benevolent and Protective Association, Sean Smoot.

Meares, McCarthy and Smoot were members of the Executive Session on Policing and Public Safety, a collaboration between the Harvard Kennedy School and the National Institute of Justice. The panelists discussed Meares’ report, Rightful Policing, which was published in February and focused on promoting procedural justice as a means of fostering greater cooperation between law enforcement officers and the communities they protect. Meares stated that, based on her research, people care more about being treated fairly by the police than they care about the relative competence of law enforcement personnel. “Even though the crime rate has declined a great deal over the last 30 years, the public impression of police has remained the same,” said Meares. “Treating people fairly is a crime-fighting strategy. It gives the public important signals and information about what it means to be a citizen in this country.” 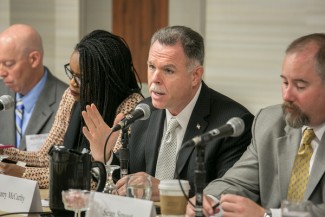 The other panelists acknowledged that the problem was more complex than simply telling cops to treat everyone fairly. From the police perspective, Smoot emphasized how stressful the job can be, while McCarthy spoke of deep-seated institutional attitudes that can’t be stamped out overnight. “A big reason why we have so many problems is because many police officers have a fundamental misunderstanding of CompStat,” said McCarthy, who was in charge of the New York Police Department’s CompStat program prior to becoming Chicago’s police superintendent.

“It’s not about outputs like arrests and stops. It’s about outcomes, such as reducing crime.” McCarthy and Smoot both endorsed the findings in Meares’ report and noted that the Illinois governor is expected to sign into law a bill that would make procedural justice training mandatory for police officers. Smoot also endorsed the idea of teaching history to police officers, noting that it was important for cops to understand why certain groups might have feelings of animus toward them. 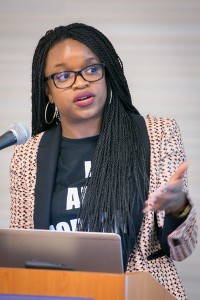 While sympathetic toward their actions, Packnett, however, said that it wasn’t enough. “There must be more urgency,” said Packnett, who served on the Ferguson Commission in Missouri. “Saying that all cops will be training within five years is not good enough. People are dying now.” Packnett pointed out that, in 2015 alone, there have been 669 people killed by police in the United States, and that there have only been 12 days this year when there haven’t been fatal police shootings. “Every time I speak, I wear a T-shirt with the name of someone that has been killed by police,” said Packnett. “I have way too many shirts, and I’m sick of making them.”

On Thursday, the ABA announced that it was establishing a task force to analyze the use of body cameras on police officers. Meares and McCarthy, however, encouraged the ABA to tackle a much more explosive issue: gun control. McCarthy noted that New York state imposed stiffer penalties for firearm-related crimes and repealed the Rockefeller drug laws. “As a result, crime went down,” said McCarthy. “It’s real simple.” Meares, meanwhile, challenged the ABA to take on lobbying groups like the National Rifle Association. “I don’t know what the ABA is doing with regards to lobbying for gun control,” said Meares. “You all need to get on this. You have money and power.”

Updated Aug. 3 to correct the name of the American Bar Foundation.