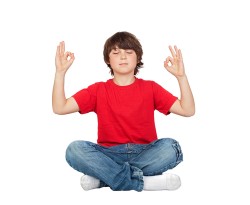 Some parents are raising religious objections to yoga classes being taught at a grade school in a San Diego suburb.

Among those raising objections is Mary Eady, the parent of a first grader. “They’re teaching children how to meditate and how to look within for peace and for comfort,” she told the Times. “They’re using this as a tool for many things beyond just stretching.”

The yoga program is supported with funds from the nonprofit Jois Foundation, founded in memory of the so-called father of Ashtanga yoga. Some foundation leaders have equated the physical act of yoga to part of a broader spiritual question, according to Dean Broyles, president and chief counsel of the National Center for Law and Policy. And he sees that as the problem. “There is a transparent promotion of Hindu religious beliefs and practices in the public schools through this Ashtanga yoga program,” he said.

A foundation representative, however, disagreed with Broyles’ assessment. “We’re good Christians that just like to do yoga because it helps us to be better people,” Russell Case told the Times.

Schools superintendent Tim Baird told the Times that children don’t have to attend the classes. “If your faith is such that you believe that simply by doing the gorilla pose, you’re invoking the Hindu gods, then by all means your child can be doing something else,” he said.