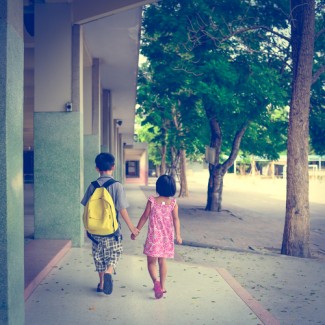 A Maryland couple who believe in “free-range” parenting say they are under investigation for allowing their children to walk home alone from a Silver Spring park.

The children are 10 and 6, and the walk home was a mile in length, the Washington Post reports. Police picked up the children on Dec. 20 about halfway through their journey. The children that day weren’t carrying their laminated card that reads, “I am not lost. I am a free-range kid.”

The parents, Danielle and Alexander Meitiv, say Montgomery County Child Protective Services has launched a neglect investigation. CPS spokesperson Mary Anderson refused comment on the case, but said neglect investigations typically look for guidance to a state law that says children younger than 8 must be left with a reliable person who is at least 13 years old. The law applies to dwellings, enclosures and vehicles.

Danielle, a climate-science consultant, told the Washington Post that her children have proven themselves responsible. “The world is actually even safer than when I was a child, and I just want to give them the same freedom and independence that I had—basically an old-fashioned childhood,” she said. “I think it’s absolutely critical for their development—to learn responsibility, to experience the world, to gain confidence and competency.”

Alexander Meitiv, a physicist at the National Institutes of Health, also objected to the investigation. “We feel we’re being bullied into a point of view about child-rearing that we strongly disagree with,” he said.