Our rules are as follows: Create a law-related diorama with Peeps, take a photo of the diorama and send the photo (JPG, GIF or PNG) by midnight Sunday, April 6 to [email protected]. Include a title of the diorama, how you would like to be identified, and a description of what the diorama represents. If you’d like to attach additional multimedia, go for it! In the past, some dioramas have had accompanying videos and original songs. 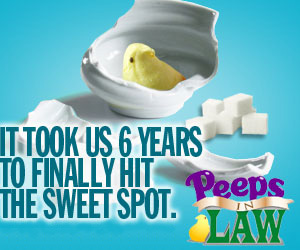