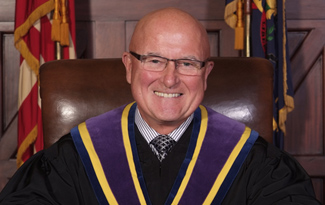 In a highly unusual order Monday, the Pennsylvania Supreme Court invoked its King’s Bench power and temporarily suspended one of its own justices, with pay, effective immediately.

The ruling also calls for the Judicial Conduct Board to determine on an emergency basis, within the next 30 days, whether a legal ethics case should be pursued against Justice Seamus McCaffery and submit a report on its findings to the supreme court, if no probable cause is found.

The ruling (PDF) appoints Robert Byer, a Pittsburgh-based partner at Duane Morris, as special counsel to the supreme court.

McCaffery’s lawyer, Dion Rassias said in a statement Monday night that “today’s action against Justice McCaffery should surprise no one, given Chief Justice Castille’s relentless crusade to destroy his career and reputation,” the Inquirer reported. “We will continue in our efforts to expose the malicious intent behind this effort to take down Justice McCaffery. We are confident that he will be cleared of any wrongdoing and returned to the bench soon.”

A dissenting justice (PDF) said the supreme court should have deferred to the Judicial Conduct Board for an expedited review and, if probable cause was found to pursue a legal ethics case, to the Court of Judicial Discipline for a determination.

“The basis for my view is procedural and I express no view on the merits,” Justice Debra McCloskey Todd wrote. However, a colleague on the supreme court bench has no lesser right to due process than any other individual in state court, she wrote.

Additionally, McCaffery accepted responsibility for more than two humdred sexually explicit emails sent to or from at least one person at the state attorney general’s office, the order notes.

Meanwhile, McCaffery has been accused by a supreme court colleague, Justice J. Michael Eakin, of pushing for Eakin to intercede on his behalf with the supreme court’s chief justice or risk having embarrassing email that Eakin allegedly received on a personal account revealed to the media.

McCaffery disputed Eakin’s allegation in a written statement Friday, insisting that “the purpose of my call was to inform him that I was hearing strong rumors that a personal email account that belonged to him contained not only hundreds of sexually explicit emails, but—even worse—racially offensive images. In light of my own recent experience, and given the way these emails have been leaking, I expressed my concern for him, especially because of the racially-charged emails, which, as I recall, I told him I feared could bring him down.”

“It would be impossible for this court to function effectively while Justice McCaffery sits on this court,” Castille wrote.

Detailing and expressing outrage at some of the sexually explicit email he said his fellow justice had sent to the attorney general’s office, and noting that several state prosecutors lost their jobs over similar conduct, Castille also objected to McCaffery’s claim that he has “cooked up” the controversy.

He himself had no involvement in the traffic citation issued to McCaffery’s wife, Castille wrote, or its dismissal by a judge who has since pleaded guilty in a ticket-fixing case.

Citing the limited resources of the Judicial Conduct Board, the chief justice said that left to his own devices, he would refer the McCaffery matter to “an outside neutral fact-finder for a report and recommendations.”

The Morning Call: “McCaffery suspension may pit king’s power against will of the people”