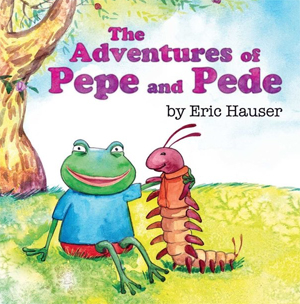 Screenshot of the cover of the book “The Adventures of Pepe and Pede.”

Cartoonist Matt Furie intended his Pepe the Frog character to be “blissfully stoned” and a “peaceful frog-dude.” But that was in 2005.

Today, Pepe is widely known as a meme used by white supremacists, as Law.com, the Washington Post and Know Your Meme explain. Furie began raising public objections last fall, and has made several attempts to reclaim the image. That includes a partnership late last year with the Anti-Defamation League in a #SavePepe campaign.

Then Furie got wind of a self-published children’s book by a Texas man titled The Adventures of Pepe and Pede. Eric Hauser told the Dallas Morning News that his book was an attempt to teach conservative views, a viewpoint he feels is lacking in children’s literature. In it, a frog named Pepe and his best friend, a centipede, bring law and order to Wishington farm by opposing a bearded alligator named Alkah.

But Furie thought the book had racist and anti-Islam themes and allusions to the alt-right, a political movement associated with racism. Through a friend, Furie connected with Louis Tompros and Don Steinberg, two lawyers at WilmerHale, and threatened to sue Hauser for copyright infringement.

Before they could file the lawsuit, Hauser agreed to a settlement. Hauser agrees not to use the copyrighted character, image or name of Pepe the Frog, or to induce others to do so; admits to copyright infringement; and agrees to destroy all copies of the book in his possession. He also agreed to pay all of the profits earned from the book—$1,521.54—to the Council on American-Islamic Relations.

“From our client’s perspective, the message that he wants to make clear is that Pepe the Frog does not belong to the alt-right,” said Tompros, who took the case with his partner pro bono.

Furie is trying to crowdfund a new book establishing Pepe as “a universal symbol of peace, love and acceptance,” the Post says.

The controversy led to Hauser being reassigned from his job as an assistant principal at a middle school near Denton, Texas, to one not involving students, the Dallas Morning News reported. The Denton Record-Chronicle reported that Hauser resigned from the district late last month.