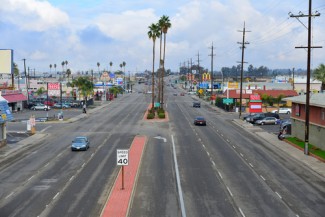 Police in Kern County, California, have killed 13 people this year, making officers there more deadly on a per capita basis than in any other U.S. county in 2015.

The statistics were calculated before police in San Bernardino County killed two suspects in the mass shooting on Wednesday that left at least 14 people dead. The suspects were involved in a shootout with police, according to this New York Times article.

In the last decade, there have been 54 shootings by police in Kern County’s two largest law enforcement agencies—the Bakersfield police department and the Kern County sheriff’s office. Forty-nine were ruled justified by panels of senior officers in the departments. Four others were apparently ruled justified, but records could not be found, and an inquiry is pending in the fifth.

A Guardian chart lists the counties with the most fatal shootings on a per capita basis, After Kern County, Oklahoma County and San Bernardino County they are:

The data is based on counties with five or more officer-involved killings.

Updated at 6:30 a.m. to include mention of the deaths of two mass-shooting suspects in San Bernardino County on Wednesday.