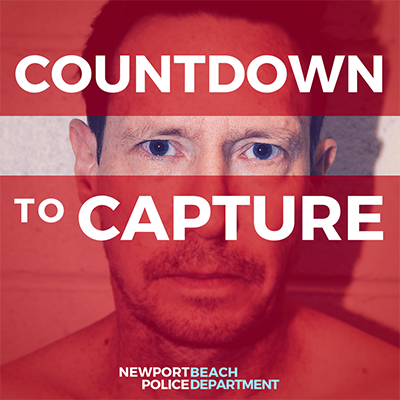 The logo for the Countdown to Capture podcast. Images courtesy of the Newport Beach Police Department.

To find a fugitive murder suspect, the police department in Newport Beach, California, is trying something new: They've released a podcast.

With the first episode published last week, Countdown to Capture details the allegations against Peter Chadwick, a British-American millionaire who disappeared in 2015 as he awaited trial for the 2012 murder of his wife.

“Peter could be anywhere in the world,” Newport Beach Police Chief Jon Lewis said at a press conference on Sept. 19. “He’s got the financial means to avoid the restrictions placed on his travel and he’s taken every opportunity to hide his tracks. We want to spread his picture and the story of his crimes far and wide. We want everyone to be looking for Peter Chadwick.”

Over two weeks, the department will release six 15-minute podcasts. A $100,000 reward exists for anyone providing information leading to the capture of Chadwick, the department’s only outstanding homicide suspect.

While riding the popularity of other true crime podcasts, like Serial, which covered the murder conviction of Adnan Syed and led to a post-conviction appeal, this is a novel approach taken by a police department.

Some feel this medium runs the risk of creating legal issues for the prosecution, including violations to the Fourth Amendment’s protection against unreasonable search and seizure.

The issue will come down to how the police handle public interaction with the podcast and the hunt for Chadwick, tweeted Elizabeth Joh, law professor at University of California at Davis School of Law and a podcaster herself.

That is: would searches encouraged by a police podcast raise Fourth Amendment questions? Wholly private searches do not, but searches encouraged or directed by the police do. I assume that the podcast-which I haven’t listened to yet-is careful about this, but the Q remains. 2/

With the stated goal of crowdsourcing the public to help find a criminal on the lam, it is in the realm of possibility that a private individual could be inspired take on the role of a sleuth, running afoul of search and seizure rules.

Colin Miller, a law professor at the University of South Carolina School of Law, says California law holds that a private person looking for evidence could constitute a government search if the government knew of and acquiesced to the private search, and if the private individual intended to assist law enforcement.

“So, if the police encourage searches by private citizens who uncover evidence that they otherwise wouldn’t have sought out, could that lead to a Fourth Amendment challenge to the evidence?” he asks in an email exchange with the ABA Journal. 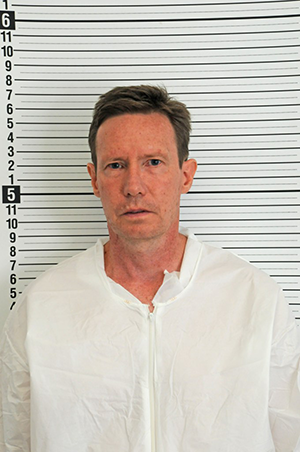 Peter Chadwick at his arrest in 2012.

Jennifer Manzella, spokeswoman for the Newport Beach Police Department, notes that “the ask from the podcast is no different than any of the other outreach methods we chose.” The recorded message in the podcast asks for tips through either a hotline at 800-550-6273 or email to [email protected].

Maria Haberfeld, a professor of police science at John Jay College in New York City, says she doesn’t see any ethical or legal issues with the podcast. She just sees a “more sophisticated ‘wanted’ notice.”

“[T]he man didn’t appear to court, after been granted bail so, the police department has the right to ask the public to assist in locating the fugitive,” she says.

Manzella says that tip lines had gone cold on the Chadwick investigation. But since launching the podcast, they’ve received multiple tips from domestic and international sources.

There are other possible headaches created by podcasting an ongoing investigation and case. The popularity of the Breakdown podcast by the Atlanta Journal-Constitution led to the trial of Claud “Tex” McIver being moved, because the local jury pool had heard about the case through the podcast. McIver, a former law partner at Fisher & Phillips, was later sentenced to life for the murder of his wife. Episode six of the Breakdown was given a Silver Gavel award by the ABA earlier this year.

In another instance, Miller says, the appellate court in the post-conviction appeal of Syed found that attorney-client privilege had been waived in-part because documents were shared with the podcasters at Serial and discussed on air.

While noting she is not an attorney or a sworn officer, Manzella is not concerned with either issue. The Chadwick investigation has been featured on domestic TV programing like The Hunt with John Walsh and Crime Watch Daily and in People magazine. The podcast is not releasing information not already public, she says. However, since Chadwick had the resources to leave the country, the goal with the podcast is to expand beyond domestic media markets. She says they have listeners in Canada and the United Kingdom and received foreign news coverage about the podcast.

“We needed a way to get people all over the world to pay attention to this case, because he’s in someone’s community,” she says. The podcast is “a mechanism to speak directly to communities outside of the U.S.”

Haberfeld believes that the attention gained by this podcast will lead to imitations in the future.

“[M]ost police departments and its members are grossly understaffed and under resourced, and any constructive help from the public—especially when looking for a dangerous fugitive—is much needed,” she says.

ABA Journal: “Podcasts have become a way for ABA entities to educate and entertain”