Parts of a policy that prohibited employees from “engaging in or listening to” gossip and negative comments at work was recently struck down by the National Labor Relations Board on the basis that some of it could prohibit employees from discussing work complaints.

“The NLRB has been making it clear of late that enforcing workplace harmony and requiring employees to present the employer in a positive and professional light infringes employee rights,” Dan Schwartz’s Connecticut Employment Law Blog reports. “Thus if you want to change your company’s culture, you need to navigate around these pitfalls and make clear that such efforts are not intended to infringe employee rights.” 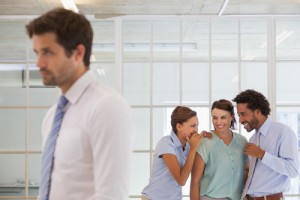 The order (PDF) involves Hills and Dales General Hospital. The Michigan acute care facility struggled with employee morale, according to the order, with problems including “backbiting and backstabbing.” Also, the order states, departments sometimes didn’t cooperate with each other.

The hospital in 2006 created a values and standards of behavior policy. Its stipulations included employees not making “negative comments about our fellow team members” and taking “every opportunity to speak well of each other.”

It also stipulated that employees represent the hospital in a positive way, and “not engage in or listen to negativity or gossip.” Listening without participating or attempting to shut it down, the standards stated, would be considered the same as participating.

The April 1 order requires the hospital to revise or rescind the policies in question.

“This is the standard remedy to assure that employees may engage in protected activity without fear of being subjected to an unlawful rule,” the order states.

Employee Danielle Corlis, who filed the charge, received a written warning about running afoul of the policy due to something she posted on Facebook. The NLRB order notes that the hospital did not violate the National Labor Relations Act by disciplining Corlis. Rather, the issue was the hospital’s maintenance of the noted rules from the values and standards of behavior policy.