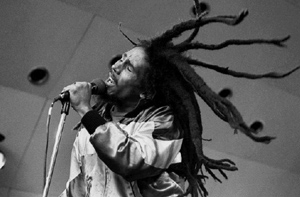 Image of Bob Marley that was included in the 7th Circuit
opinion.

The federal appeals judge who pictured an ostrich in an opinion has turned to photography again, this time in a decision on a prisoner’s suit over shorn dreadlocks.

“Dreadlocks can attain a formidable length and density,” the Jan. 13 opinion (PDF) says. A photo of the late reggae musician Bob Marley is included to illustrate. The author is Judge Richard Posner of the Chicago-based 7th U.S. Circuit Court of Appeals, who pictured an ostrich and a person with his head in the sand in a November opinion criticizing lawyers who ignore precedent.

The new opinion allows the claim of an Illinois inmate who alleged prison authorities violated his free exercise rights by requiring him to cut his hair. He claimed prison officials allowed Rastafarians to wear long hair, but not members of the his religion, the African Hebrew Israelites of Jerusalem.

“One can see why prison officials might fear that a shank or other contraband could be concealed in an inmate’s dreadlocks,” Posner writes. Case law indicates a general ban on all long hair would by upheld as constitutional. But there is no right to apply a “Rastafarian exception,” while denying the same long-hair rights to other sincere religious plaintiffs, Posner says.

How Appealing noted the opinion.