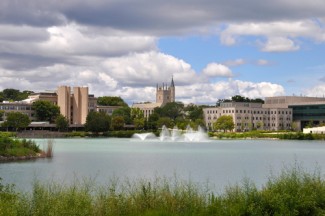 Federal appeals judge Richard Posner of Chicago often garners attention for the opinions he writes, but his decision tossing a rabbi’s suit against Northwestern University may not be getting as much attention as the concurrence.

The first sentence of the Nov. 6 opinion (PDF) by Posner begins with a same-day Wikipedia reference for background on a branch of Hasidic Judaism known as Chabad or Chabad‐Lubavitch, and even includes a pronunciation guide for the terms. (Posner explains that all his online references are for material consulted on Nov. 6.)

The next paragraph introduces one of the plaintiffs, Rabbi Dov Hillel Klein, and provides a link to a YouTube video that, Posner explains later, shows the rabbi to be “lively, engaging, eminently approachable, enthusiastic, and one might even say charismatic.” The university, however, disaffiliated with Klein in 2012 after alleging that he continued to allow underage drinking at the Chabad house near campus. As a result, Klein lost a contract for rabbinic supervision of a campus kosher food provider.

Klein alleged the university was motivated by hostility to the Chabad sect, violating a federal anti-discrimination statute protecting the right to contract. Posner, writing for a panel of the Chicago-based 7th U.S. Circuit Court of Appeals, agreed with the trial court that Klein’s suit should be tossed, finding that the federal law, Section 1981 of the Civil Rights Act, does not reach religious discrimination.

Writing at the Volokh Conspiracy, University of Chicago law professor Will Baude notes Posner’s opinion and research, but devotes more space to “a strange concurrence” by Judge William Bauer.

The concurrence reads: “I cheerfully concur in this enlightening opinion. The background and various nuances of the religious groups discussed, or alluded to, are not taken from the record of the case but are both enlightening and, I confess, entertaining. Since the result meets my legal and religious inclinations, I have no reason not to endorse the dissertation and ruling and therefore I do.”

The concurrence and its reference to meeting “religious inclinations” generated plenty of debate at the Volokh Conspiracy. Some readers suggested Bauer was joking; one commenter thought such jokes should be avoided unless opinions could include smiley faces. Others suggested Bauer was mocking Posner’s writing style and use of material outside the record. For his part, Baude said he can’t figure out why religious inclinations ought to decide whether Bauer joins Posner’s opinion in full.

Bauer explains his concurrence in an interview with the ABA Journal. “I was being tongue in cheek,” Bauer told the ABA Journal, “and let me tell you why. As I pointed out at the beginning of the [concurrence], the citations are to things outside the record. …

“Once you’ve arrived at the opinion based on the record, I think that’s where you ought to quit.”

Bauer added that his religious inclination “is that you should serve liquor at religious events” and notes his comments in oral arguments, where he asked about the university’s treatment of Irish organizations and about Illinois laws on underage alcohol use. “Use of liquor is that important to me–I come from an Irish background,” Bauer said during the arguments.

Baude had noted a previous concurrence by Bauer in which he faulted Posner for opining about the reason lawyers have chosen law over medicine. Bauer said in that concurrence that, although he was one of those lawyers who chose law over medicine, the necessary legal point was already made “and that’s where I would stop.”