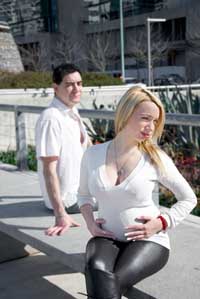 Developments in technology that make it possible to identify prospective fathers during pregnancy call for a change in thinking about their responsibility to help pay—for pregnancy or for an abortion, a law professor says.

A prenatal blood test makes it possible to link a woman’s partner to her pregnancy, according to University of Richmond law professor Shari Motro. A potential ramification, she writes for the New York Times, is that men might be asked to support their partners before a child’s birth. “They might be asked to chip in for medical bills, birthing classes and maternity clothes, to help to cover the loss of income that often comes with pregnancy, or to contribute to the cost of an abortion,” Motro writes.

Most states frame men’s pregnancy obligations as an element of child support or as part of a parentage order that takes effect after the birth of a child, she says. Motro suggests men should have financial responsibility even if there is no birth. “Former spouses are often required to pay alimony; former cohabiting partners may have to pay palimony; why not ask men who conceive with a woman to whom they are not married to pay ‘preglimony’?” she writes.

Motro considers, then discounts a criticism. “The most frequent objection I hear to this idea is that it will give men a say over abortion,” she writes. “A woman’s right to choose is sometimes eclipsed by an abusive partner who pressures her into terminating or continuing a pregnancy against her will, and preglimony could exacerbate this dynamic. But the existence of bullies shouldn’t dictate the rules that govern all of society. In the name of protecting the most vulnerable, it sets the bar too low for the mainstream, casting lovers as strangers and pregnancy as only a woman’s problem.”

But preglimony could deter a different kind of sex abuse, Motro says. Men who pressure partners into unwanted sex would be liable for the consequences. And men will also benefit, especially those who want to help but are turned away.

“Both partners had a role in the conception; it’s only fair that they should both take responsibility for its economic consequences,” Motro says.