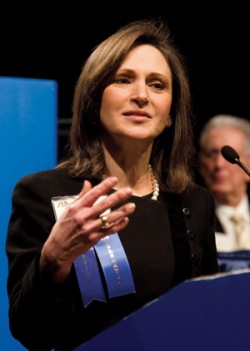 After months of calling on Congress to provide debt relief for law graduates struggling economically with the rest of the country, ABA President Carolyn B. Lamm is hopeful she’ll leave the ABA Midyear Meeting in Orlando, Fla., with more ammunition for her efforts.

On Friday, the ABA Board of Governors included loan assistance for law students as one of the ABA’s 10 legislative priorities on Capitol Hill.

And next week, the ABA’s policy-making House of Delegates will consider a late report that urges Congress, the executive branch and commercial lenders to introduce programs to help relieve the heavy debt burdens that many law students face. The recommendation is co-sponsored by the Commission on the Impact of the Economic Crisis on the Profession and Legal Needs and the Law Student Division.

“Because of the recession, a lot of students are facing debt they can’t pay,” said Lamm, a partner at White & Case in Washington, D.C. “We’ve been urging the White House, DOE [Department of Education] and Congress to persuade lenders to create the suspended payment period. This resolution will give that effort the full policy backing of the ABA.”

In an interview this afternoon with the ABA Journal, Lamm said helping law students gain debt relief is a crucial aspect of helping the legal profession deal with the recession.

During the past few months, Lamm has been talking to law students about their financial predicaments. “It’s so sad to hear some of the stories,” she said. But, she added, there are even bigger stakes involved. “Lawyers are important to society and their communities,” and more comprehensive assistance for students in financial need is necessary “if you want the profession and the bench to adequately reflect the community.”

Lamm acknowledged that some critics say the ABA actually should take steps to limit the number of law schools and students in the United States to help ease the competition for jobs in a tight market. But she takes issue with those arguments. “There is a fundamental misunderstanding of what the ABA can do,” she said, pointing out that efforts to impose restrictions would run afoul of antitrust rules.

Lamm begged off when she was asked the most important nonlaw question at the midyear meeting: Who is going to win the Super Bowl on Sunday? “I don’t even know who’s playing,” said Lamm, claiming that her ABA presidential duties have kept her too busy to follow sports news. “I have a very active practice, so I know what being busy is,” she said, “but this is breathtaking.”

ABA: ABA Commission on the Impact of the Economic Crisis on the Profession and Legal Needs