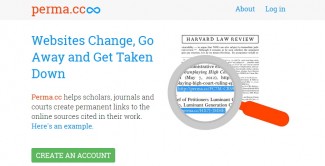 A service that enables courts and researchers to make permanent links to research found on the Web has won a Webby Award for best legal site of 2015.

Perma.cc, developed by the Harvard Law School Library and supported by a network of more than 60 law libraries, takes on the widespread problem of broken or defunct Web links, also known as “link rot,” which can that can undermine research by scholars and courts.

The problem was explained in a 2013 paper by Harvard Law professors Lawrence Lessig, Kendra Albert and Jonathan Zittrain. Their research detailed in, “Perma: Scoping and Addressing the Problem of Link and Reference Rot in Legal Citations,” revealed that 50% of URLs in U.S. Supreme Court opinions no longer link to the originally cited material.

Perma.cc has developed a process to preserve and “vest” links used in research.

Both will be recognized at a ceremony May 18 in New York City emceed by Hannibal Buress.

The ABA Journal also received a nomination (its first in seven years), along with Jurist Legal News and Research, and TSMP Law Corporation, a Singapore-based law firm.