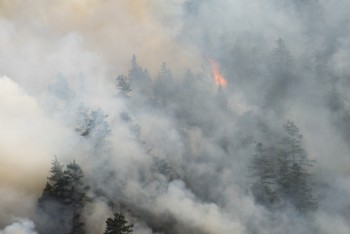 About 3,800 male and female inmates in California are helping fight devastating wildfires that have killed at least 31 people in the northern part of the state.

The inmates are paid $2 a day for time spent on standby at a conservation fire camp and another $1 an hour for time on the fire line, report NBC New York, the Orange County Register and NewsReview.com. The inmates also get two days off their sentence for each day spent in the fire camp, compared to one day that can be earned for good behavior.

The inmates clear brush from containment lines to keep fires from spreading. They have to volunteer to participate in the program, be certified physically fit and undergo two weeks of training.

“When you hear that a fire has been 50 percent, or 100 percent, contained, that’s inmate firefighters doing the job,” said Department of Corrections spokesman Bill Sessa in an interview with NewsReview.com.

Inmates who fight fires in California help taxpayers save $124 million a year, according to the state’s Department of Rehabilitation and Corrections. However, three inmates have died fighting fires over the last two years.

David Fathi, director of the American Civil Liberties Union’s National Prison Project, has raised questions about the state’s use of inmate firefighters.

“The purpose of incarceration is to protect public safety, not to provide a captive labor force for the government,” he told NewsReview.com.

“Prisoners can’t unionize, and they’re not covered by workers’ compensation, occupational health or safety laws, or any of the other programs that protect workers in the outside world,” Fathi added. “If they’re injured or killed on the job, the chance of compensation for them or their families is extremely remote.”

The job doesn’t appear to be a path to employment with California Department of Forestry and Fire Protection after an inmate is released. The agency conducts criminal background checks.

“That means years of service on fire lines can essentially mean nothing once a person’s prison sentence ends,” according to NewsReview.com.

NBC News has a story on the rising death toll here.