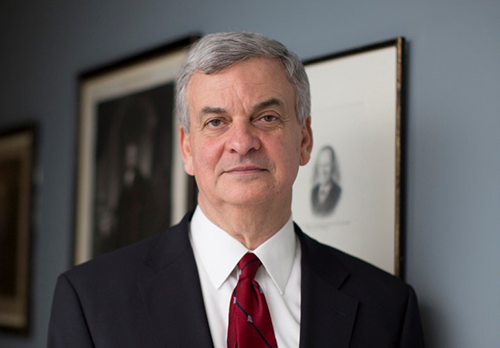 A former general counsel to the U.S. Navy who has been honored for his human rights advocacy was named on Monday to be the new director of the ABA Rule of Law Initiative, and will oversee the association's international human rights programs.

Alberto J. Mora will take over from Elizabeth Andersen as the associate executive director of the Center for Global Programs. The center, which was created in April under a reorganization of the ABA, comprises ROLI, the Center for Human Rights, and the ABA representatives and observers to the United Nations.

“I am deeply honored to have been entrusted with the leadership of this extraordinarily important program,” Mora said. “At home and abroad, the duty to protect and advance human dignity begins with ensuring that human rights and the rule of law are observed. No organization is more committed to these ideals than the ABA, and I am proud to be able to contribute to its efforts.”

Mora began his career as a foreign service officer in the 1970s, and has served as the general counsel to the U.S. Information Agency from 1989-1993 and to the U.S. Navy and the Marine Corps from 2001-2006. He also served as the reporting senior of the Naval Criminal Investigative Service and the department’s chief ethics officer. After leaving government service in 2006, he served as general counsel for Walmart Inc. and Mars Inc. In 2013, he joined Harvard University’s Carr Center for Human Rights Policy as a senior fellow.

As general counsel of the Department of the Navy, Mora strongly opposed abusive interrogation techniques being used on detainees at Guantanamo Bay, an opposition that led to him being awarded the John F. Kennedy Profile in Courage Award in 2006.

“Mora, whose civilian position accorded him a rank equal to that of a four-star general, soon came to learn that the cruel and abusive practices of United States military interrogators at Guantanamo were the result of significant policy shifts at the highest levels of the U.S. government,” wrote the John F. Kennedy Presidential Library and Museum in a press release announcing his award. “Over the next three years, Mora waged a campaign inside the Bush Administration to prevent military and civilian leaders from codifying any policy that might implicitly or explicitly sanction the mistreatment of Guantanamo detainees as part of the war on terror.”

“The American Bar Association is thrilled that someone of Alberto’s experience, reputation and integrity is joining our organization as associate executive director of global programs,” said ABA President Hilarie Bass in a press release announcing Mora’s hiring. “The ABA’s rule of law programs in more than 50 countries, as well as its Center for Human Rights, will all benefit from having someone with Alberto’s leadership skills to support and enhance their critically important programs.”

ROLI was established in 2007 to bring together a variety of international rule of law programs the ABA began sponsoring in 1990 after the fall of the Berlin Wall. It currently has five branches that serve the following regions: Africa; Asia; Central Europe and Eurasia; Latin America and the Caribbean; and the Middle East and North Africa. It has a budget of $40 million, and nearly 400 employees across the globe.

The Center for Human Rights runs projects within the United States and internationally, including the Justice Defenders Program to protect human rights advocates, efforts combating human trafficking and atrocity prevention to fight genocide.

Andersen is leaving the ABA at the end of the month to become executive director of the World Justice Project. The WJP, which began as an ABA initiative under former ABA President William H. Neukom, has been an independent nonprofit since 2009. It conducts research on human rights and the rule of law around the world, producing multiple reports and studies including the annual Rule of Law Index.

Andersen had served as the director of ROLI since 2014.