Prop 8 judge was emotional during testimony on gay conversion therapy, having experienced it himself

Vaughn Walker, the openly gay U.S. district court judge who presided over a California trial that led to the legalization of same-sex marriage, underwent “conversion” therapy to become straight, a new book states.

The story is shared in Forcing the Spring: Inside the Fight for Marriage Equality, the San Francisco Chronicle reports. Written by Pulitzer Prize-winning New York Times reporter Jo Becker, it is scheduled for release Tuesday.

Walker, who Becker interviewed, received the treatment in the late 1970s, according to the article. He was in his early 30s. Walker said he had experienced some “faux romances” with women, according to the book, but had never sex with a man. He knew that acknowledging his sexuality would hurt his career. Walker, a Stanford Law School graduate who clerked on the Central District of California U.S. District Court, also practiced at San Francisco’s Pillsbury, Madison & Sutro. 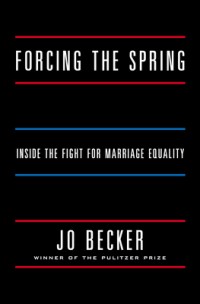 After a few counseling sessions with a psychiatrist, “he pronounced me cured,” Walker reportedly told Becker. A primary reason for the doctor’s conclusion, according to the article, was because Walker had never had sex with a man. Walker “wanted badly to believe that was true,” he told Becker, but he knew that it wasn’t.

A witness testified about his own experience with conversion therapy during the Proposition 8 trial. According to the book, Walker blinked back tears while listening to it.

In 2010, Walker declared California’s ban on same-sex marriage an unconstitutional act of discrimination. He was the first federal judge to make such a finding, and the U.S. Supreme Court dismissed an appeal filed by Prop 8 sponsors.

While at Pillsbury, Madison & Sutro, Walker represented the U.S. Olympic Committee in a trademark suit against a San Francisco group that wanted to call its athletic events the Gay Olympics. He was nominated to the San Francisco federal bench in 1987 by Ronald Reagan, and various civil rights groups opposed the nomination based on his work in the case. But the nomination went through in 1989.

Walker retired from the bench in 2011, and he now does arbitration and mediation work with FedArb.

Walker’s partner is a doctor, according to the article, and the two have never discussed marriage, he recounts in the book. The book also notes that Walker began to live a little more openly after he became a judge, being seen with his partner and occasionally visiting a gay bar. Walker publicly revealed his sexual orientation in April 2011, two months after he retired from the bench.

The book also mentions Charles Cooper, the lawyer who represented Prop 8 supporters and also argued on behalf of a Hawaii same-sex marriage ban. His stepdaughter is gay, and she and her girlfriend got engaged in 2012. Cooper told Becker he’s looking forward to attending their wedding, which reportedly will take place in Massachusetts.