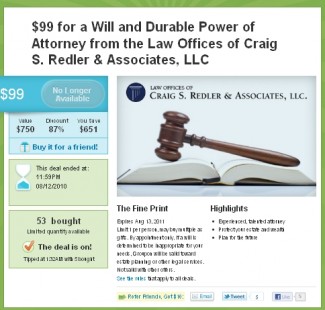 Updated: Groupon is known for its great deals on everything from restaurant meals to oil changes, but can it ethically be used by law firms seeking new business?

An ethics subcommittee of the North Carolina State Bar will be considering the issue, according to assistant ethics counsel Suzanne Lever. She tells the ABA Journal the matter was sent to the subcommittee at a meeting Thursday.

Groupon allows consumers to pay one price up front for a service that is more valuable. A restaurant, for example, may offer a $50 meal for $25 that is paid immediately. One law firm that used Groupon, the Law Offices of Craig S. Redler & Associates in St. Louis, offered to provide a will and durable power of attorney for $99.

Groupon gets paid a percentage of the amount earned by the advertiser, and that’s the issue that will be considered by the North Carolina ethics subcommittee. A proposed opinion written by committee staffers opines that the arrangement amounts to impermissible fee-sharing with a nonlawyer, according to an Oyez column by North Carolina Lawyers Weekly.

The bar provided a copy of the proposed opinion, which has not been posted online, to the ABA Journal. “The Ethics Committee recently approved participation in a barter exchange program in which members of the exchange pay a cash transaction fee of 10 percent on the gross value of each purchase of goods or services,” the proposed opinion says. Unlike the barter program, the Groupon compensation, negotiated on a case-by-case basis, “is a percentage of the amount actually paid to the lawyer and appears to constitute revenue sharing with a nonlawyer,” the proposed opinion says.

Carolyn Elefant, writing at Nolo’s Legal Marketing Blog, noted the opinion. “Though personally, I don’t find much mischief in fee splitting as a way to spread advertising costs, I can easily see many other bars taking the same approach,” Elefant wrote. She did question, however, whether marketing on Groupon would be profitable for law firms.

“It seems that lawyers are bound to lose money,” she opines. “More importantly, unlike restaurants or hotels, will Groupons yield referrals or repeat business for lawyers? I’m skeptical.”

Lawyer Craig Redler tells the ABA Journal he cleared his Groupon offer with Missouri ethics regulators before it ran. “I was absolutely aware of the fee-split issue,” and that’s why the ad stated it is valid for estate planning or other legal services if a will isn’t appropriate, Redler says.

“It was essentially a coupon like you’d run in the Yellow Pages,” he says. “It was a discount.”

Redler says the firm lost money when clients got the $99 will and power of attorney. But the ad brought calls from a lot of new clients, most of whom sought additional legal services. From that standpoint, he says, the Groupon worked well.

Redler says he’s surprised by the response to his ad. “I didn’t realize it would cause such a stir,” he says. “I’ve been getting e-mails from attorneys all over the country asking how it’s worked out.”

Updated at 12:45 p.m. to include comments from Redler. Updated on Jan. 20 to include ethics committee action taken on Thursday.