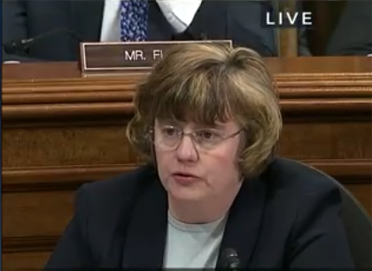 The Arizona sex crimes prosecutor who questioned Brett Kavanaugh’s accuser has concluded that no reasonable prosecutor would bring a case against the U.S. Supreme Court nominee based on the evidence presented at the Senate Judiciary Committee hearing on Thursday.

Rachel Mitchell said the evidence is not even sufficient to satisfy a preponderance of the evidence standard. The Washington Post, NBC News and the Wall Street Journal have coverage.

Mitchell had been hired by Republicans to conduct the questioning. She mostly questioned the accuser, Christine Blasey Ford, for Republican senators, who later took over questioning of Kavanaugh.

“A ‘he said, she said’ case is incredibly difficult to prove. But this case is even weaker than that,” Mitchell wrote in a memo. “Dr. Ford identified other witnesses to the event, and those witnesses either refuted her allegations or failed to corroborate them.”

Among those unable to corroborate Ford’s account was her lifelong friend, Leland Keyser, who has said she has no recollection of the party and doesn’t know Kavanaugh, Mitchell said.

Mitchell said Ford did not identify Kavanaugh as her attacker in sessions with therapists, and she was unable to remember “key details of the night in question,” including how she left the party and how she got home. She has also differed on when the party took place, describing it at various times as occurring in the mid-1980s, the early 1980s, and the summer of 1982.

“While it is common for victims to be uncertain about dates, Dr. Ford failed to explain how she was suddenly able to narrow the time frame to a particular season and particular year,” Mitchell said.

Mitchell also said that the hearing date was delayed because Ford had claimed that symptoms of post-traumatic stress disorder prevent her from flying, yet she flies fairly frequently for hobbies and work.

Mitchell said the activities of Democrats and Ford’s lawyers likely affected her account, and provided a timeline of her contacts with them.

Another former sex-crimes prosecutor, Professor Shawn Marie Boyne of the Indiana University McKinney School of Law in Indianapolis, tells the ABA Journal that it is difficult to make a prosecution assessment without a full investigation.

“As a former sex crimes prosecutor,” Boyne writes in an email, “it is important to remember that in a typical case there would be a full investigation including forensic evidence such as torn clothing, photographs and witness interviews. I have successfully prosecuted rape cases where victims had gaps in their memories.

“I’m frankly surprised that the prosecutor even issued an opinion because she was not given the opportunity to fully question the judge. Unfortunately, in our legal system prosecutors are also political operators.”

The director of the gender violence program at Harvard Law School has another take on the hearings. In a CNN op-ed. Law lecturer Diane Rosenfeld called the hiring of Mitchell a “serious and insensitive error in judgment.”

“The prosecutor’s role is to represent victims and to prosecute defendants,” Rosenfeld wrote. “Wouldn’t it have been more appropriate for a defense attorney or public defender to have questioned Ford?”

The Senate Judiciary Committee voted Friday to advance Kavanaugh’s nomination to the Senate, but a vote is being delayed while the FBI conducts a limited investigation of sexual assault allegations against Kavanaugh.